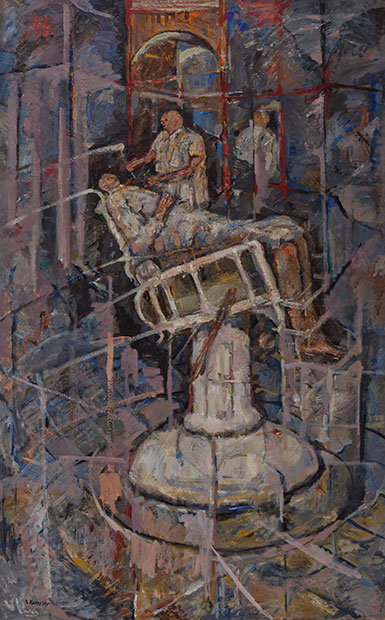 Above: Seymour Rosofsky, Patient in Dentist's Chair, 1961, Oil on canvas. Smart Museum of Art, The University of Chicago, Gift of the Rosofsky Estate, 2014.16.

Spearheaded by Leon Golub and united by a shared interest in the figure during a period that is often seen as dominated by abstraction, the group created deeply psychological works that drew on classical mythology and ancient art.

This is the first major exhibition to examine the history and impact of the Monster Roster, which has been overlooked despite being one of the most important Midwestern contributions to the development of American art. It examines not only the complex aesthetics and personal styles of Golub and his compatriots—including Cosmo Campoli, June Leaf, Dominick Di Meo, Seymour Rosofsky, and Nancy Spero, among others—but also uncovers the Monster Roster’s relationships with preceding generations of Chicago artists and differences from the well-known Chicago Imagists who followed.

Monster Roster brings together approximately 60 major paintings, sculptures, and works on paper from the Smart Museum and other collections in order to provide the definitive account of the movement, from the formation of Exhibition Momentum in 1948 to the group’s dispersal in the mid 1960s.

On view in galleries adjacent to Monster Roster, three related exhibitions and installations explore Monster Roster printmaking, the group’s antecedents and influences, and the next generation of Chicago Imagists.

The exhibition is accompanied by an in-depth catalogue featuring full-page color reproductions of all works in the exhibition as well as a detailed chronology, historical photos, reprints of key texts by Jean Dubuffet and Franz Schulze, and new essays by the exhibition curators and Dennis Adrian, Jon Bird, Thomas Dyja, Mark Pascale, and Arlene Shechet.

A Time of Monsters 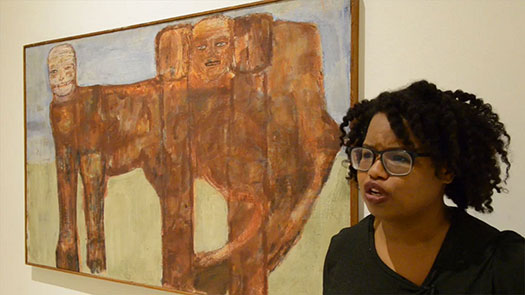 9 things to write to Mother about

An original spoken-word performance by University of Chicago student May Huang. Inspired by Fred Berger’s Untitled (1958) on display in Monster Roster.

Who made the Roster?

The sixteen artists of the Monster Roster.

Who named the Roster?

The history behind the name “Monster Roster”

News and notes on our special exhibition, Monster Roster.

The exhibition and catalogue have been made possible in part by the Estate of Gerald and Eunice Ratner, the Terra Foundation for American Art, the Smart Museum’s Pamela and R. Christopher Hoehn-Saric Exhibition Fund, the Efroymson Family Fund, the National Endowment for the Arts, and Ulrich E. and Harriet H. Meyer. Additional support is provided by the Biff Ruttenberg Foundation and the Karla Scherer Center for the Study of American Culture at the University of Chicago.

Presented in the Richard and Mary L. Gray Gallery and the Robert and Joan Feitler Gallery.