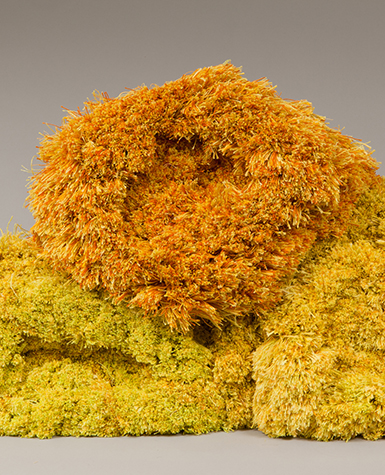 In conjunction with Monochrome Multitudes, the Smart Museum of Art and University of Chicago partners present a quarter-long artist talk series.

Join Sheila Hicks and other exhibiting artists as they consider the rich and sometimes idiosyncratic references and resonances in their own work, while also speaking to the histories of the monochrome and abstraction broadly conceived.

Sheila Hicks received her BFA and MFA degrees from Yale University. She received a Fulbright scholarship in 1957–58 to paint and take photographs of archaeological sites in Chile. While in South America she developed her interest in working with fibers. After founding workshops in Mexico, Chile, and South Africa, and working in Morocco and India, she now divides her time between New York and Paris, where she studied Pre-Columbian textiles. ​In each place, she has mined local knowledge to inform work that transcends geographic boundaries. Her diverse approach to textiles put her at the center of the burgeoning Fiber Art movement of the 1960s and ’70s, in which artists were inventing new possibilities for pliable media. They created sculptural and three-dimensional fiber works that upended conventions, establishing a new order in the largely male-dominated arena of two-dimensional tapestry-making. Hicks continues employing intensely saturated color and the raw materials of textiles—wool, synthetic thread, linen flax—in works that are rigorously constructed by wrapping, piling, and weaving her materials. Hicks has exhibited in the 2017 Venice Biennale, the 2014 Whitney Biennial, and the 2012 São Paulo Biennial. Recent solo presentations include “Lignes de Vie” at the Centre Pompidou in Paris in 2018; Free Threads 1954-2017, Museo Amparo, Mexico; and “Pêcher dans La Rivière” at the Alison Jacques Gallery, London. Hicks will be represented in Monochrome Multitudes with a 1984 work she gifted to the Smart Museum, Evolving Tapestry.

Support for the Monochrome Multitudes artist lecture series has been provided by the Goethe-Institut and the following University of Chicago partners: Center for East Asian Studies, Center for Latin American Studies, Center for the Art of East Asia, Center for the Study of Gender and Sexuality, Department of Art History, Franke Institute for the Humanities, Institute on the Formation of Knowledge, Open Practice Committee in the Department of Visual Arts, and Wigeland Fund in the Division of the Humanities.