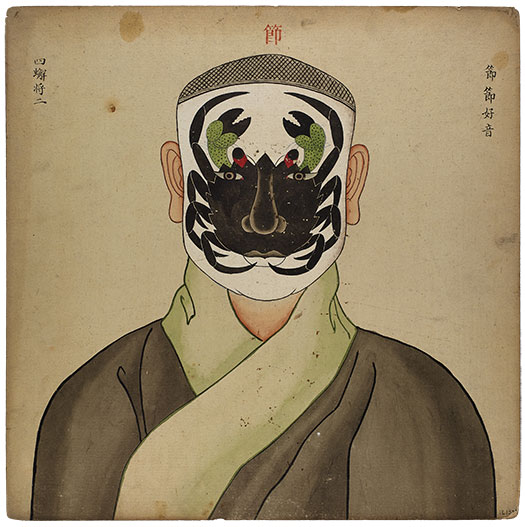 From the village to the court, the spectacle of theater was enjoyed not only on the stage—in costumes, props, and face painting—but also across the full spectrum of Chinese visual culture, from scroll paintings to popular prints.

One of the first major exhibitions of its kind in the West, Performing Images focuses on the vibrant imagery, rather than ethnographic artifacts, of Chinese opera. The exhibition showcases how operatic characters and stories were represented in pictorial and decorative motifs in a wide array of media including ceramics, illustrated books, painted fans, prints, photographs, scroll paintings, and textiles.

Featuring nearly eighty remarkable objects on loan from major museum collections, the exhibition and its catalogue reveal how Chinese visual and performing traditions were aesthetically, ritually, and commercially intertwined.

UChicago Arts presents a diverse selection of art, film, music, conversations and performances connected to the arts and cultural history of China during a five-month festival.

From the magnificent art and spectacle of Chinese opera to rarely screened silent films and world premiere performances, the Envisioning China festival opens a window on the rich cultural heritage of China, past and present.

In a gallery adjacent to Performing Images, the Smart Museum presents the concurrent exhibitionInspired by the Opera: Contemporary Chinese Photography and Video (February 13–June 15, 2014).

This concise exhibition reveals the continued relevance of opera, both within contemporary Chinese society and within the experimental work of individual artists. It includes photography and videos by Liu Wei, Chen Qiulin, Liu Zheng, and Cui Xiuwen.

Together, the works help illuminate the relationship between contemporary art and China’s cultural heritage.

The exhibition is accompanied by the first scholarly publication of its kind in English. Through essays and illustrated object entries, it offers new interdisciplinary perspectives on Chinese visual and performing traditions.

February 13
At the Threshold
opening celebration

March 7, April 6, May 3, May 16
Film Series: Chinese Opera
Presented in collaboration with the Film Studies Center

May 3
Family Day: About Face

April 10
Party at the Smart: Be a Character

Judith T. Zeitlin, William R. Kenan Jr. Professor in East Asian Languages and Civilizations the College and faculty committee member of Theater and Performance Studies at the University of Chicago, and Yuhang Li, Assistant Professor of Art History at the University of Wisconsin–Madison, in consultation with Richard A. Born, Smart Museum Senior Curator.

The exhibition and catalogue have been made possible by the Smart Museum’s Pamela and R. Christopher Hoehn-Saric Exhibition Fund and its Andrew W. Mellon Foundation Endowment; the Office of the Provost, The University of Chicago; Mary Smart and the Smart Family Foundation; Janis Kanter and Thomas McCormick and the Kanter Family Foundation; the Walter E. Heller Foundation; Gay-Young Cho and Christopher Chiu; the Confucius Institute at the University of Chicago; and Furthermore—a program of the J. M. Kaplan Fund. Support for related programming is provided by the Richard and Mary L. Gray Center for Arts and Inquiry, the Office of the Deputy Provost for the Arts, the Franke Institute for the Humanities, and the Center for East Asian Studies at the University of Chicago.