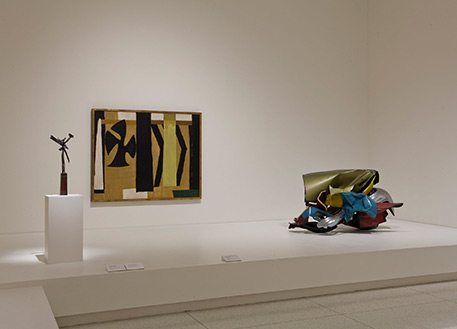 Above: Installation view of the Smart's gallery of Modern Art and Design, showing works by Richard Hunt, Robert Motherwell, and John Chamberlain.

The modern gallery features European and American painting, sculpture, and decorative arts dating from the 1880s to the early 1960s.

Highlights of the 2015–2016 installation include masterpieces like Frank Lloyd Wright's Robie House furniture as well as newly acquired paintings by Paul Delvaux, Robert Motherwell, and Kenneth Noland on view for the first time.

These and other works demonstrate the varied ways artists and designers of the period responded to a world transformed by industrialization, city population growth, and shifting social structures and political ideologies that spawned both mechanized warfare and new forms of urban leisure.

Artists devised innovative styles and subject matter to embody such experiences, including images of the city and its entertainments, the unconscious mind and charged inner feelings, and the formal and material properties of art itself.

A small area of the gallery is dedicated to thematic displays of prints and drawings. These installations rotate every four months to protect the works from damage caused by long-term exposure to light.