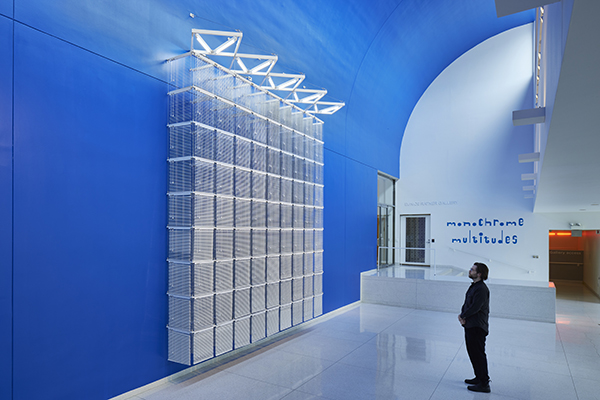 For Sol LeWitt Upside Down onto Wall – Modular Wall Structure, Expanded 20 Times, Haegue Yang (born 1971, Seoul, South Korea) employs her signature material to domesticate the white, open cube sculptures of Sol LeWitt (1928–2007). This installation joins a larger series that “traces” the conceptual artist’s modular composition begun in the 1960s: expands or reduces their size, upends their orientation, suspends them from the ceiling or mounts them on the wall. Filling the spaces LeWitt had left open in his sculptures, the sterile white blinds become a permeable monochrome that plays with density and lightness, opacity and transparency. Yang’s blind structures channel these canonic examples of conceptual art, but the artist seeks to restore that movement’s “spiritual aspect” by striving for what she considers a certain “freedom within a narrative freighted with symbolism.”

Mounted in the lobby, the arrangement of the blinds is contingent and fleeting as they simultaneously reveal and obscure a bright blue wall behind. Per the artist’s specifications for this installation of the artwork, the exhibition team voted on a selection of blues available at the Museum’s local paint supplier to choose the shade most similar to French artist Yves Klein’s patented International Klein Blue. Centered on what Yang calls “quasi-Yves Klein Blue,” the quasi-empirical survey—both absurd and precarious—contests Klein’s individualistic legacy to offer a more collective set of relations between artists, museum professionals, and the history of art. This absurdist take on historical precedent extends to Yang’s treatment of this LeWitt’s Modular Wall Structure (1968), which is flipped on its head but appears to stay the same due to its quadrilateral format. Complicating notions of originality, “quasi” is an artistic strategy to relativize the Western canon, to turn it “upside down.” Yang’s layers of citation, expansion, and overturning at once oppose and honor the art historical narratives the West long took for granted.

Sol LeWitt Upside Down onto Wall – Modular Wall Structure, Expanded 20 Times was commissioned for the exhibition Monochrome Multitudes (September 22, 2022–January 8, 2023) as part of the Smart Museum of Art’s ongoing Threshold series. Launched in 2010, the Threshold series brings large-scale installations of contemporary art to the Smart Museum’s lobby and courtyard on a regular basis. The prominent placement of these commissions ensures that all visitors—whether they have come to the Museum for a class, an exhibition, or a program—will instantly encounter thought-provoking new art.

Orianna Cacchione, Curator of Global Contemporary Art and Lecturer in the Department of Art History, and Christine Mehring, Faculty Adjunct Curator and Mary L. Block Professor of Art History and the College.