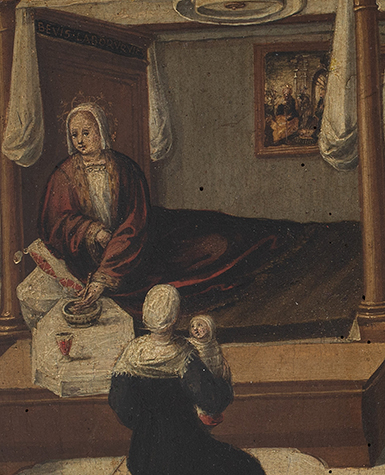 A Conversation with Rachel Cohen, Bellamy Mitchell, and Nora Lambert

Join us for an evening conversation about the place of artworks in the personal lives of their beholders, both past and present.

Many of the works in Lust, Love, and Loss in Renaissance Europe were made to be lived with, and meant to be part of the most intimate moments of life—birth, death, marriage, sex. Their compelling power continues today. As part of the program, professor and art critic Rachel Cohen will lead a participatory close-looking conversation about one such work from the exhibition, curated by Nora Lambert. And the three panelists will talk together about contemporary responses to the works in the show, including Bellamy Mitchell’s meditative essay published in Gulf Coast. Threads of this conversation began some years ago in Cohen's annual seminar “Writing About the Arts,” in which both Lambert and Mitchell were students.

Rachel Cohen is Professor of Practice in the Arts in the Creative Writing Program at the University of Chicago, and writes about art and artists for The New Yorker, Apollo Magazine and her looking notebook, rachelecohen.com.

Bellamy Mitchell is a PhD Candidate in the Committee on Social Thought and the Department of English at the University of Chicago, where she has received fellowships for her pedagogy and research on the rhetoric and politics of apologies from the Center for the Study of Gender and Sexuality, as well as the New Voices in Nonfiction Prize; her poetry and essays have appeared in the Chicago Review, SixByEight, and Prodigal. Her essay “Compartmentalization, or, Some Thoughts on Boxes” appears in the journal Gulf Coast.

Nora S. Lambert is the Andrew W. Mellon Curatorial Fellow at the Smart Museum of Art, curator of Lust, Love, and Loss in Renaissance Europe and a PhD candidate in the Department of Art History at the University of Chicago, where she specializes in late medieval and early modern Italy.