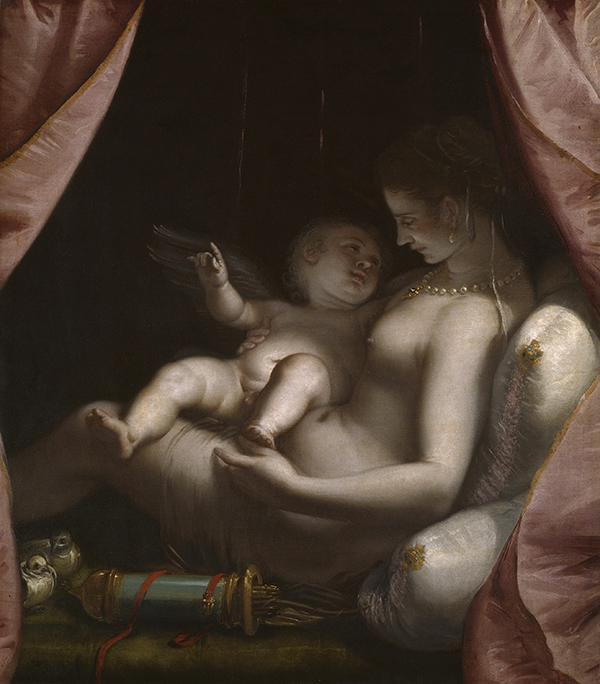 Passion, violence, and virtue emerge in this exhibition as fundamental, intertwined elements in the artworks of Renaissance Europe.

The objects on view—created for private homes and personal consumption—offer glimpses into the lives of artists and their audiences. Painters, printmakers, and craftsmen, inspired by popular literary sources including Ovid’s Metamorphoses, Boccaccio’s Decameron, and the Bible, interpreted their stories for everyday settings.

Domestic objects such as painted panels and ceramics celebrated momentous life events, including marriage and childbirth, yet their narratives were not overtly festive. Imagery frequently recounted the dire fates of mismatched lovers, revealing societal anxieties about fidelity and paternity. Large-scale oil paintings echo these ideas in grander formats, highlighting the consequences of moral trespass. Male and female protagonists alike suffer fatal repercussions for their transgressive longings. Meanwhile, in engravings and woodcuts, even happy and passionate couples face the inexorable progression of time. Viewers of these prints, poring over images of hapless lovers pursued by menacing skeletons, confronted the end of earthly pleasures and their own mortality.

Taken together, the works of art on display illuminate the many ways that objects lay at the heart of cultural rituals and consuming desires through which relationships were formed, celebrated, and extinguished.

Delve deeper
Download the interpretation packet (PDF) for a full checklist and copy of exhibition texts.

Top: Master of the Apollo and Daphne Legend, Daphne Fleeing from Apollo, c. 1500, Oil, formerly on panel, transferred to canvas. Smart Museum of Art, The University of Chicago, Gift of the Samuel H. Kress Foundation, 1973.45.

This media archive features recordings of past virtual programs held in conjunction with Lust, Love, and Loss in Renaissance Europe. New videos will be added throughout the exhibition’s run.

Objects associated with love, marriage, and family lead us into an expanded Renaissance world that includes the more private lives of women and children and their domestic spaces. Recorded on April 8, 2021, this conversation marked the opening of the exhibition. It features a conversation between Andrea Bayer (Metropolitan Museum of Art) and Jacqueline Marie Musacchio (Wellesley College), moderated by exhibition curator Nora S. Lambert.

Jill Burke (University of Edinburgh) and Patricia Simons (University of Michigan) offer a nuanced investigation into the construction of gender-based narratives and power dynamics in early modern European art. Recorded on May 6, 2021. Moderated by exhibition curator Nora S. Lambert.

This conversation between Rachel Cohen, Bellamy Mitchell, and Nora Lambert focuses on the place of artworks in the personal lives of their beholders, both past and present. Recorded on May 10, 2021.

In this talk, recorded on May 13, 2021, historian Ada Palmer (UChicago) examines how the artistic splendor of the Renaissance—and the willingness of patrons to invest their fortunes in it—was a reaction to crisis and violence, rather than a sign of peace.

In Lust, Love, and Loss, flesh becomes object, and object softens into flesh. The skin becomes a veil, a billowing cloth a sail, the body a bowl—or an ornament—or a frame. Material and matter, animate and inanimate, dead and alive are the same: the line of an etching, a brushstroke, a bronze, a breath, a word, clay. A ship, a channel, a chamber, a chalice, a creature, a carafe, a woman, a cloud, a sound: Vessel.

Organized by the Feitler Center for Academic Inquiry, this exhibition is curated by Nora S. Lambert, Andrew W. Mellon Curatorial Fellow at the Smart Museum of Art, and Ph.D. candidate in the Department of Art History at the University of Chicago.

Support for this exhibition has been provided by the Smart Museum’s Andrew W. Mellon Foundation Endowment, the Samuel H. Kress Foundation, The Gladys Krieble Delmas Foundation, Mary Smart and the Smart Family Foundation of New York, and the Feitler Center for Academic Inquiry Fund.

Presented in the Janis Kanter and Thomas McCormick Gallery and the Edward A. and Inge Maser Gallery.