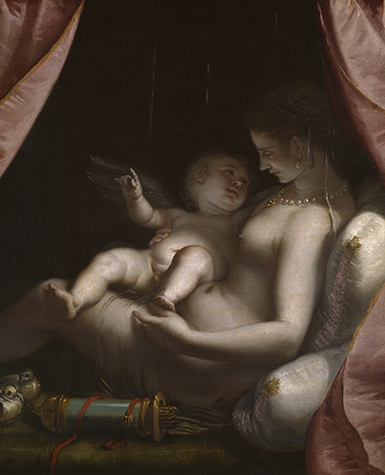 Join Jill Burke (University of Edinburgh) and Patricia Simons (University of Michigan) for a nuanced investigation into the construction of gender-based narratives and power dynamics in early modern European art.

Many of the works in Lust, Love, and Loss in Renaissance Europe feature dramatic stories of feminine exemplars drawn from biblical texts, mythology, and ancient history. Simons and Burke will explore how representations of these female subjects—most often created by male artists—shaped and reflected the political, religious, and cultural upheavals of the era. In conversation with the exhibition curator, Nora Lambert, our panelists will also consider how these artworks continue to elicit powerful responses in their viewers today.

Jill Burke, Professor of Renaissance Visual and Material Cultures at the University of Edinburgh, is a leading international expert in Italian Renaissance Art. She is a historian of the body and its visual representation, focusing on Italy and Europe 1400-1700. Her groundbreaking and politically-engaged research seeks to reformulate the understanding of the representation of the body in Italian and European early modern culture. Jill is currently investigating how people in the Renaissance tried to look good -how they sought to change their bodies, faces and hairstyles to meet beauty ideals. Her book, How to Be a Renaissance Woman, will be out soon with Profile Books. Her previous book, The Italian Renaissance Nude (2018) was selected for Choice's 2019 Outstanding Academic Titles list and reviewed as 'essential' and a 'keystone for future studies'. Jill also co-edited The Renaissance Nude, the catalogue for the exhibition of the same name in Los Angeles and London in 2018-19 and was on a curatorial team of this exhibition.

Patricia Simons is a specialist in the art of Renaissance Europe (primarily Italy, France and the Netherlands) with a special focus on the representation of gender and sexuality and interdisciplinary research on visuality and material culture. Her books include The Sex of Men in Premodern Europe: A Cultural History (Cambridge University Press, 2011)and the co-edited Patronage, Art, and Society in Renaissance Italy (Clarendon Press, 1987). Her work ranges from fourteenth-century Italian imagery to contemporary Australian art. Essays, published in anthologies and peer-review journals like Art History, Renaissance Quarterly, and Renaissance Studies, have investigated such issues as portraiture as a mode of fictive representation, medical discourse in relation to visual culture, the representation and reception of female and male homoeroticism, the visual dynamics of secrecy and of scandal, and the public and theatrical use of Christ Child figures. Her latest projects are two large, open access Google Docs. One is a global bibliography on premodern women artists and patrons, the other is a bibliography on race and visual representation in European culture, c. 1300-1700. She is Professor Emerita, Women’s and Gender Studies/History of Art, University of Michigan, Ann Arbor, and an honorary Professorial Fellow at the University of Melbourne.