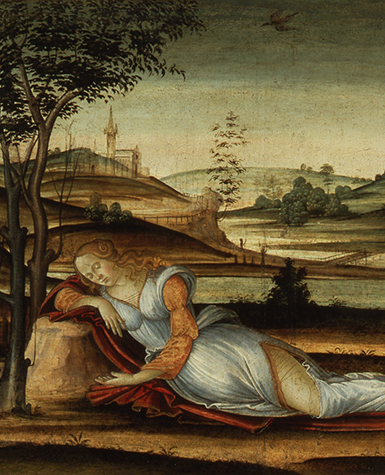 Join Andrea Bayer and Jacqueline Musacchio as they reflect on the themes of Lust, Love, and Loss in Renaissance Europe and their echoes in the Metropolitan Museum of Art’s 2008 exhibition, Art and Love in Renaissance Italy, which looked closely at objects associated with love, marriage, and family in the Italian Renaissance.

These objects have never been more fascinating than today, as they lead us into an expanded Renaissance world that includes the more private lives of women and children and their domestic spaces, and also introduce us to remarkably complex imagery that could unexpectedly weave together love, family and death.

Register for the talk

Appointed the Metropolitan Museum of Art's Director for Collections and Administration in October 2018, Andrea Bayer was previously the Jayne Wrightsman Curator in the Department of European Paintings. She received her PhD from Princeton University in 1990 and has been on the staff of The Met since that time. An expert on Italian Renaissance art, she has worked on a range of exhibitions, both thematic investigations—such as Painters of Reality: The Legacy of Leonardo and Caravaggio in Lombardy (2004), Art and Love in Renaissance Italy (2008–9), Unfinished: Thoughts Left Visible (2016)—and monographic shows on artists such as Giambattista Tiepolo, Dosso Dossi, and Antonello da Messina. Her most recent exhibitions include Making the Met, 1870-2020, in celebration of the museum's 150th anniversary. She has been a curator in European Paintings since 2007, and, in 2014, became the Jayne Wrightsman Curator. Outside the department, Bayer served as Interim Head of Education (2008–9), and for six years was coordinating curator for the Curatorial Studies program run jointly by the Museum and New York University's Institute of Fine Arts. She is currently co-chairman of the Director's Exhibition Committee.

Jacqueline Marie Musacchio is Professor of Italian Renaissance and Baroque Art at Wellesley College. Her scholarship has focused on the intersection of female experience and material culture in Italy from the fourteenth to the nineteenth centuries. This includes her books The Art and Ritual ofChildbirth in Renaissance Italy (1999) and Art, Marriage, and Family Life in the Florentine Renaissance Palace (2008) and her work on the exhibition Art and Love in Renaissance Italy (2008-2009). More recently she has turned her attention to the experience of American women in nineteenth-century Italy, and published essays on the copyist Emma Conant Church, the poet and sculptor Anne Whitney, the painters and art dealers Mary Elizabeth and Abigail Osgood Williams, and the sculptor's wife Jane M. Healey Jackson. This research, which will culminate in a book with the working title At Home Abroad, has earned fellowships from the American Philosophical Society, the Friends of the Princeton University Library, the Center for Advanced Study in the Visual Arts, Winterthur Museum, Garden, and Library, and the British Library's Eccles Centre for American Studies. Many of her publications are available online via Academia.