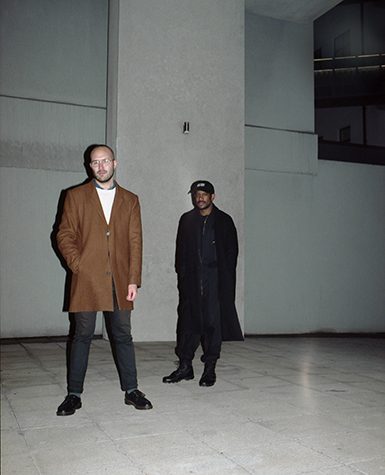 This is the duo’s first U.S. appearance. The works follows their previous collaborations, Absent Personae and The Wages of Being Black is Death.

FREE, but PLEASE NOTE: RSVP is required, and event entry is on a first-come, first-served basis. RSVP does not guarantee entry. RSPV here »

Presented by Lampo and the Smart Museum of Art in conjunction with the special exhibition Solidary & Solitary: The Joyner/Giuffrida Collection, and organized in coordination with Arts + Public Life.

We will perform a material, deep time investigation of the Black Body as an artifact and unfortunate assemblage of 400 years of trauma and recovery. A theatrical choreography between light versus dark skin in social spaces surfaces the disparity of value between the Black Body and the Whites, both mirroring and incessantly triggering the other into reflexive recollection.

To behave correctly around the Whites is to ensure a smooth social transaction in the public spheres of everyday life. The aesthetic of “coolness” in a way serves as a methodology for engaging these social situations with as much ease as possible—a quick heist, a clean getaway. The fight to be seen and experienced as human is an invisible and phenomenological problem with a solution strewn in abstraction.

Substantia Nigra is latin for “black substance,” referring to the reward-signaling tissue in the brain, which distributes sensation within the body. The performance then uses the Black Body as a technology, introducing the concept of “Black Compositional Thought” as a technique of ordering and revising traumas via ontogenetic rhythms.

Absent Personae demonstrated the Black Body as a spectacle of labor, violence and self-exploitation, while The Wages of Being Black is Death reflected on the Black Body as downtrodden and discarded by liberal Western culture. Substantia Nigra offers a platform for assembling theories and practices of opacity through “coolness” and a spiritual jazz, towards a future beyond the horizons installed by the Whites.

Kepla is the alias of Liverpool-based electronic composer and sound artist Jon Davies (b. 1988, Hong Kong). Harvesting salvaged audio from a vast range of secondary sources, he crafts elaborate, seemingly dystopian sound worlds that are at once rooted in an earthly ecology and reflective of a distinctly alien life force. Over the past three years, he has produced a self-released EP, co-created the acclaimed Absent Personae with media theorist DeForrest Brown Jr. and video artist Chris Boyd, and composed the soundtrack for “The Happy Jug” with author Nathan Jones.

DeForrest Brown Jr. (b. 1990, Tampa, Fla.) is a New York-based rhythmanalyst, media theorist and curator. His work is concerned with speculative futures in performative contexts and programmatic intersections of technology and thought. He produces digital audio and extended media as Speaker Music. In 2017 he was the inaugural Suzanne Fiol Curatorial Fellow at Issue Project Room. He co-produced Ebbing Sounds Symposium with Swiss publication zweikommasieben and curator Marcella Faustini in May 2018 at Gray Area Art + Technology, with support from Swissnex San Francisco. He has presented work at Kunst-Werke Institute for Contemporary Art, New Museum, MoMAPS1, Artists Space, 92nd Street Y, Abrons Art Center, Signal Gallery, Cafe Oto, E-Flux’s Bar Laika, Raven Row Gallery, H0l0 and Cleopatra’s. He is also one half of Elevator to Mezzanine with artist and musician Steven Warwick, and most recently released the black comedy mixtape The Wages of Being Black is Death (PTP) with sound artist Kepla, ahead of their research and performance praxis Substantia Nigra.