Smart to the Core

Throngs of University of Chicago undergraduates, on their way to the gym or traveling to downtown Hyde Park, routinely cut through the campus compound known as the Cochrane-Woods Art Center. Many pass by without realizing that a vibrant art museum lies behind the unassuming limestone paneling. This winter, however, the galleries teemed with activity from students in this year’s “Self, Culture, and Society” yearlong course sequence. Over 500 undergraduates take this sequence each year, and these students and their professors had come to the Smart Museum of Art to see a show curated especially for them.

While several students admitted, on the outset, that the lure of unlimited pizza is what persuaded them to attend, the opportunity to view and discuss works of art chosen to pair with their coursework is what convinced them to stay. Smart Museum staff, volunteers, and newly-minted graduate student gallery guides led intimate conversations in front of select artworks for the attendees, helping them draw connections between their studies, their own life experiences, and the works themselves.

The University of Chicago’s famed Common Core, the foundation of its undergraduate curriculum, provided the impetus for the exhibition, entitled Smart to the Core: Embodying the Self. Embodying the Self is the inaugural installation of the proposed biennial Feitler Center series Smart to the Core, curated by Feitler Center director Issa Lampe to bring object-based teaching into the heart of undergraduate education. In so doing, it has also brought many new undergraduates into the museum galleries for the first time.

By incorporating direct engagement with the visual arts into the Core, the Smart Museum is continuing a tradition of innovation and expansion that has been a part of the University’s history since Common Core’s inception in 1931. The first iteration of this program was the brainchild of Chauncey Boucher, a historian and college dean who in the 1920s set about devising a thoroughly new curricular system to advance and enrich the quality of the student body and their education alike. The central feature of Dean Boucher’s “New Plan” was a set of controversial interdisciplinary, yearlong courses in each of the University’s new divisions—biological sciences, physical sciences, social sciences, and the humanities—to be administered by an undergraduate College. Class attendance was optional, and self-motivated students were expected to read independently and sit for six-hour exams at the end of each year. National newspapers, including The New York Times, praised the program, particularly highlighting its central principles of initiative and self-direction, pointing out that the Plan “goes the whole way in throwing on the student responsibility for his own education.”

Boucher’s revisions initially received the support of President Robert Hutchins, who believed that “the object of education is to prepare the young to educate themselves throughout their lives.” However, he soon became ambivalent and then opposed to the program, fearing that Boucher’s survey courses would promote a “disease that affects all college teaching in America, the information disease”—an education heavy on mere facts and a miscellaneous assemblage of courses rather than big ideas. Meanwhile, many faculty were staunchly opposed to the curriculum’s interdisciplinarity, and were criticized by Boucher and his supporters for “greedily protecting their private diggings…doing [so] under the false banner of educational theory.”

While interdisciplinarity has remained a fundamental tenet of today’s Common Core, the initial curriculum has undergone substantial revisions over the last several decades. In the Core’s early years, all books were drawn from European traditions, which, while exposing students to foundational texts that raise fundamental questions about human experience, offered a limited range of voices and perspectives. Curricular expansions of the 1950s and 60s saw the development of classes in Islamic, Chinese, and South Asian civilizations. Also in the 1960s, the University created area studies programming focused on Latin America and Africa. Reforms of the 1980s finally saw these non-Western courses accepted as part of the Core, on par with the European and American offerings.

Embodying the Self continues this capacious approach to the array of perspectives in the Common Core curriculum, including more manifold international and contemporary voices. The “Self, Culture, and Society” course sequence is perhaps the ideal place for Smart to the Core to begin, as the readings explore theories and themes from the fields of psychology, sociology, gender and sexuality studies, postcolonial studies, and race studies, asking questions about identity and self-representation. In the gallery, a range of artworks by modern and contemporary artists offers thoughtful meditations on notions of selfhood, whether through self-portraiture, abstraction, or the juxtaposition of imagery with critical textual commentary.

Some artists repossess their stolen rights to self-representation. Ayana V. Jackson’s near life-size 2016 self-portrait, Laboring Under the Sign of the Future, shows the artist dancing in front of her camera, seemingly defying gravity. Dressed in nineteenth-century clothing, Jackson sets out to revise notions of black female identity inherited from Antebellum America. While grappling with the historical legacy of constraint, Jackson also imagines “that there must have been these stolen moments in which you could find ways within your bondage to be free.” Her exuberant steps and swirling skirts dispute simplistic representations of black women as bodies unceasingly under the emotional weight of labor and abuse.

Hank Willis Thomas’s 2009 I Am A Man also disallows external societal conventions, perceptions, and prejudices the right to define and construct the identity of minority groups. His bold paintings offer new iterations of the eponymous strike signs carried by African-American protestors during the 1968 Memphis Sanitation Worker’s Strike, when city employees argued for recognition as human beings. The paintings are presented in two rows of ten each. Each sign in the first row refers to a notorious historical moment when the humanity of African-Americans was debated, defended, or denied. One potent phrase recalls the decision of the 1787 United States Constitutional Convention that each slave counted as three-fifths of a person, while “Ain’t I a woman” refers to the 1851 speech of activist and former slave Sojourner Truth. Thomas imagines the second-row paintings as individual lines in a collective poem, and the final phrase, “I am. Amen,” offers his testament to the irrevocable humanity of all people.

Fittingly, the Common Core is also quite literally at the center of the exhibition. A reading station with a selection of texts by authors including Sigmund Freud, Simone de Beauvoir, Michel Foucault, Judith Butler, and Kwame Anthony Appiah—all drawn from the “Self, Culture, and Society” syllabi—sits in the middle of the gallery. Here, viewers can become students, and perhaps form their own connections to both the ideas on the page and those on the walls.

A version of this article appeared in the spring 2019 issue of the UChicago Arts Magazine. 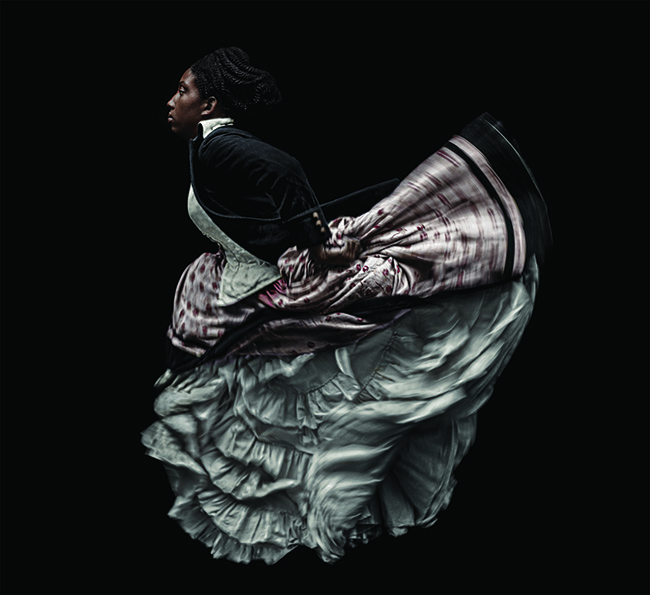 Ayana V. Jackson, Labouring under the sign of the future, 2016. Courtesy of the artist and Mariane Ibrahim Gallery. 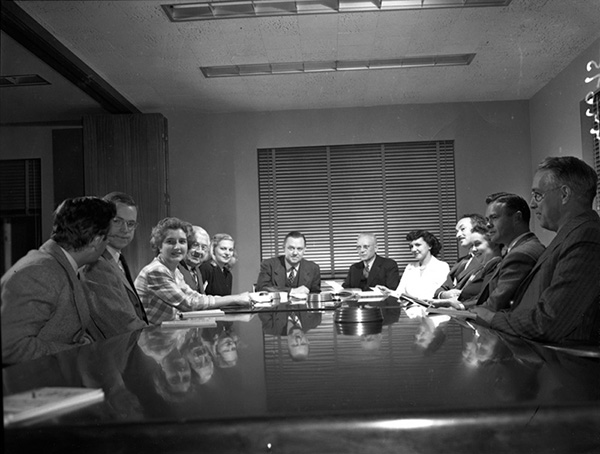