Looking at Photography from the Smart’s Collection

This spring, the Museum as Classroom presentation organized by the Feitler Center for Academic Inquiry features recent acquisitions of photographs by James Barnor and Marc Riboud showing scenes from the early days of Ghanaian independence in the late 1950s and early 1960s. These important additions to the Smart Museum of Art’s collection increase its global reach while also connecting to exciting new courses at the University of Chicago like “The Idea of Africa” taught by Adom Getachew, Neubauer Family Assistant Professor of Political Science and the College, and Natacha Nsabimana, Assistant Professor of Anthropology.

Inspired by these new additions, we take a closer look at the photography in and of Africa in the Smart Museum’s collection.

In support of research into these works, Leslie M. Wilson, the Smart’s Curatorial Fellow for Diversity in the Arts (2019–2021), enlisted the efforts of two Undergraduate Research Associates in 2020: Daisy Coates (’AB 22) and Serin Lee (’AB 21). In their thoughtful examination of these works, they made connections to other photographs in the Smart’s collection by photographers such as Henri Cartier-Bresson, while encouraging us to take a much closer look.

In Nuit de Noël (Happy Club), Malick Sidibé captures a late-night moment at an outdoor venue, surrounded by trees and chairs pushed to the outer ring to expand the dance floor. Nearly symmetrical, the center of the photo features a brother and sister, framed by foliage, experiencing a spontaneous, energetic moment. The subjects’ close kinship is apparent, their heads are centimeters apart, their bodies angled inwards towards each other. The two sit slightly to the right of the frame, allowing just enough room for the sight of a solitary woman whose eyes lead off frame. Alone on the dance floor, the pair attracts the focus of the viewer, the action of the photo contained. The bright flash brings vibrancy and warmth to the setting, reflecting off of their clothing. Viewers can observe details of the texture of their outfits: the grain in the stripes on the young girl’s dress, threads and wrinkles in the suit the young man wears, as new fashions and musical styles became part of popular culture in a newly independent Mali.

Sidibé’s framing of this scene tells us so much about this night. A record player sits on the table connected to a speaker suspended in the trees. Bottles sit under tables and chairs, abandoned presumably by people who left them for the worn dance floor, tired from nights of energy and party. This produces a story about long nights of celebration and joy; everything apparent in the dancers’ faces is also corroborated by the atmosphere.

Sidibé originally presented photographs such as this one in chemises, folders of multiple photographs; typically, one chemise included photos from the whole night. Prints of the individual photos were souvenirs that subjects of the photo could purchase, memorializing their experiences the next day. The photo Nuit de Noël (Happy Club) belongs to Sidibé’s chemise: Les “Happy-Boys,” dated February 25, 1963.[i] The chemise features 23 photos from the same night with the subjects of this photo appearing in other prints, some on the dance floor and others as posed group shots. A note on the chemise indicates this date as “Veille du Ramadan” or “Eve of Ramadan.” Together, the photos in the chemise place Nuit de Noël (Happy Club) within the context of the celebration and rhythmic freedom of that holiday. Sidibé developed the print in the Smart Museum’s collection in 2002 from the photograph taken in 1963 and at a much larger scale than the photographs in the chemise, allowing for closer study of the moment.

This photo is one of thousands that Sidibé took in Mali from the 1960s to 1980s depicting popular clubs and fashion fads. Together, they offer a chronological narrative as he documented events and offered visions of the ever-changing realm of photography and culture. His photography functioned as a backdrop for Malian society, as evidenced by clothing and media from the African diaspora, as products shaped by colonial encounters that have forever impacted the landscape of popular culture. The effects of colonialism continued into the post-colonial landscape, as the relationship of objects to the cultures shifted, as teens from different countries in the 60s were listening to the same music or experiencing similar fashion fads. Photos like Nuit de Noël (Happy Club) feel authentic and faithful to the subjects and society, as they give glimpses into real situations of a time and place. Sidibé’s photos convey an appreciation of the moment; they are from a place and depict scenes of which he was a part. Sidibé joined in these dances and events and was invited to observe and seize something significant.

[i] Images of this chemise and others can be seen in Malick Sidibé: Mali Twist (Paris: Fondation Cartier pour l'art contemporain / Editions Xavier Barral, 2017).

In Untitled (Woman Seated on Bench in Moscow Subway Station), a mother and her child sit in an empty subway station enveloped by walls adorned with detailed reliefs of a crowd adoring Joseph Stalin, former premier of the Soviet Union. The architecture of the subway station looms over the pair, with its grand arches, marble and granite walls. Henri Cartier-Bresson’s photograph assigns the viewer the role of another subway rider, one who is simply passing through and seeing the “real” Russia, untouched. This work was from a series that he made in Russia in 1955 in which he “tried to get a direct image of the people going about their daily life” at a time when the country’s enigmatic nature preoccupied the world.[i] His documentation was meant to fill the gaps of knowledge about Russia and circumvent its highly propagandized images and writings.

While a subway station is a zone of transition, here it is a setting of repose. In a quiet area—lacking movement and the bodies that typically fill a subway station with noise and fast-paced passage—a woman and her baby close their eyes as they take a break. The woman sits in the foreground, largely obscuring her young child, whose head is just visible beside her. There is no separation between the bodies; they flow into each other. The mother’s body appears tense, seemingly still protective over her baby, even in sleep. Positioned left of center and tucked in the corner of this frame, they appear as still as the statues, movement only noted in the blur of the mother’s face and the tilt of the frame. The controlled motion in Cartier-Bresson’s “decisive moment” is emphasized by the titled frame and the blur, as if capturing the motion both before and after he took the photo. Although on a tilted axis, the photo remains balanced, the woman and her child on one side and Stalin and his subjects on the other. The empty space between them contributes to the tranquil setting and simultaneously calls attention to the lack of people. The woman and her child turn away from Stalin as the other subjects, the people in the sculpture on the wall, turn toward Stalin, praising and adoring him with flowers. The subway itself was essentially a monument of Soviet propaganda, with grand detail in the reliefs, extravagant materials used in construction, and all together the conscientious creation of a public service—evidence of the importance the nation placed on architecture and infrastructure.

What appears to be a commonplace scene in a Moscow subway station speaks to the nature of Cartier-Bresson’s practice. Cartier-Bresson’s individual photos may only represent a split second among many but, as he writes in the book The People of Moscow (1955), the series, as a whole, “represents my visual discovery faithfully.”[ii]  The photos reveal his own perspective of Russia, showing the ordinary routines in Russia through a candid lens. Contrary to the use of the camera as a tool for propaganda, Cartier-Bresson uses it instead to capture his observations as he moves through uncharted territory.

The frame extends just far enough to the right that it includes Stalin’s whole body, cutting off just beyond his left arm. The photo is positioned at eye level, as if the viewer is witnessing it themselves, and shows Stalin positioned high above the ground, above any onlooker; subway riders must look up to the statue of Stalin, mirroring the people in the sculpture. Cartier-Bresson’s idea of the “decisive moment” is to capture what is important and what might reveal the underlying narrative that pre-exists; with or without paired text, the viewer can see their objective and discern from the photo what is significant. In The Decisive Moment (1952) Cartier-Bresson writes, “In a photograph, composition is the result of a simultaneous coalition, the organic coordination of elements seen by the eye.”[iii]

Daisy Coates (AB’22) was an Undergraduate Research Associate for Photography in spring 2020 at the Smart Museum. She began working at the museum freshman year and is currently working as an Undergraduate Research Associate for Metropol Drama, as well as a docent. She is a major in Art History and Cinema/Media studies, whose areas of interest include contemporary art, documentary photography, and black horror films. 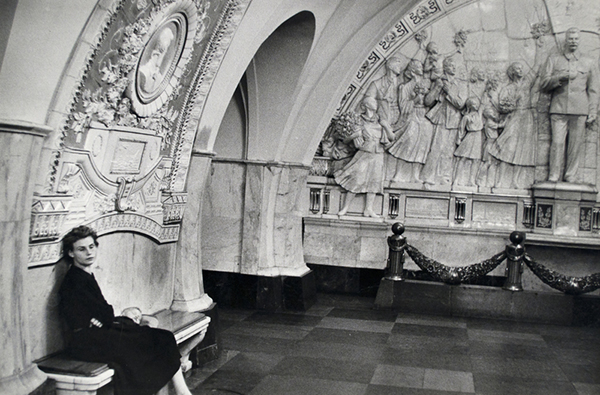