From Ernest Cole’s House of Bondage

Looking at Photography from the Smart’s Collection

This spring, the Museum as Classroom presentation organized by the Feitler Center for Academic Inquiry features recent acquisitions of photographs by James Barnor and Marc Riboud showing scenes from the early days of Ghanaian independence in the late 1950s and early 1960s. These important additions to the Smart Museum of Art’s collection increase its global reach while also connecting to exciting new courses at the University of Chicago like “The Idea of Africa” taught by Adom Getachew, Neubauer Family Assistant Professor of Political Science and the College, and Natacha Nsabimana, Assistant Professor of Anthropology.

Inspired by these new additions, we take a closer look at the photography in and of Africa in the Smart Museum’s collection.

In support of research into these works, Leslie M. Wilson, the Smart’s Curatorial Fellow for Diversity in the Arts (2019–2021), enlisted the efforts of two Undergraduate Research Associates in 2020: Daisy Coates (’AB 22) and Serin Lee (’AB 21). In their thoughtful examination of these works, they made connections to other photographs in the Smart’s collection by photographers such as Henri Cartier-Bresson, while encouraging us to take a much closer look.

Several male commuters huddle dangerously between the railcar juncture of a Johannesburg-bound train, as the slight silhouette of a commuter inside the train car underscores the packed interiors that have forced these men outside. The photographed subjects here reflect the commuter culture that apartheid painstakingly forced upon black South Africans. On a train with too little room, the riders hold onto what narrow hand- and footholds they can. The precariousness and physical calculation of survival on-the-go—features that defined the day-to-day lives of black people during this era—are on display. These riders were first displaced from their jobs, and then from humane means of getting to them.

Ernest Cole describes his outrage at these “Nightmare Rides” in House of Bondage’s eponymous chapter on commuting. This image appears beside text describing the shoddy erraticism of train services that ran to black townships. Trains came and went in scarce numbers, without marked destinations, following arbitrary if not nonexistent timetables. Cars were usually packed-to-bursting in seconds, and prospective riders would throw themselves between cars or cling to fixtures outside them. This was indisputably risky—close to one hundred riders could be killed riding city trains in a single year—but many did so daily out of the necessity circumscribed by apartheid.

At the same time, the vertical composition of the moment captured in this photograph gives no clear indication of which direction is forwards or backwards. The image meditates on duration and in-betweenness, both temporally and spatially. The commuters’ bodies are sandwiched between the two cars, and one young man looks outwards, his face knitted in thought while his body presses to the speeding car. In that space, he reflects on the past and anticipates his future. The photograph evokes a remarkably felt historical present in its transitional sense—a transition that, in Cole’s captured motion, is caught between the moment just past, and the one to come.

But what are these lives moving between the train cars? What is achieved by expanding the “decisiveness”[i] of the photographed moment into the lived time that is ongoing? Insisting in his 1968 letter to Ford Foundation editor Thomas Cooney that “art, like truth, cannot be captured on schedule,”[ii] Cole and his photographic eye buck the photojournalistic tradition of shipping photographers off to train their viewfinders on sites that were not theirs. Approaching the photographed riders with his own years-long memory of their shared “event,” Cole suggests that the eye that has lived the images behind the camera is the one best equipped to create breathing room in their suppressed and perpetuated realities. Cole suspends time for one precariously lived “middle” of so many under apartheid. He expands the photographed moment (a vertically cropped “in media res”[iii]), and through the young man’s expression, captures an intense preoccupation with extending this moment of survival into the next. Yet in doing so, Cole also points to the futures for black South Africans and extends them somewhere beyond our view through the gaze of the photograph’s central figure.

[i] “the decisive moment”: A concept introduced in Henri Cartier-Bresson’s book of the same name (1952) describes the moment when visual and emotional elements of an unfolding scene come fleetingly together in a photograph to give life and form to the essence of that situation.

[iii] in media res: a concept used to describe a narrative that opens in the middle of its plot (in Latin, literally “into the middle of things”).

A young girl runs down a road alongside a swath of blocky, uniform brick houses, one of the defining features of apartheid’s displacement of black South Africans. Stretching seemingly to infinity, these identical rows marked profound losses for the families forced to fit their lives into them. Once living in richly diverse communities, families were uprooted and relocated based solely on their tribal designation. Moreover, black South Africans became prohibited from home ownership and, thus, the ability to build their lives on land that belonged to them. These circumstances took them from being kept artificially poor to being made even poorer.

In this photograph from House of Bondage’s chapter “Black Spots,” Ernest Cole captures with special acuity the forms of abstraction and erasure of black lives happening under this forced relocation. Some were sent to destinations so remote, that they weren’t even on the map. He does so to counter the state’s visual and written narratives that often championed these discriminatory measures as magnanimous social schemes. These were offered through published propaganda advertising the homogenizing and marginalizing developments as altruistic reforms.

The falseness of that rhetoric is contested by Cole’s photograph, which offers viewers a different realism. Here, perspective lines dissolve into the unidentifiable mass of houses, further punctuated by utility poles that crowd the flattened horizon. The roofs similarly catch daylight at harsh angles and push the eye, like so many lights on a landing strip, towards a vanishing that lacks a clear vanishing point. The product of physical displacement that the photograph underscores would be lost against this backdrop alone, as would the people who inhabit its homogenizing spaces--seen hovering by doorways in the back--if not for the young girl running in the foreground from one side of the road to other.

The young girl in a billowing dress, caught in a blur of motion, interjects a shock of white into the grayscale photograph. She is the crux of Cole’s photograph. Legs apart in a sweeping stride, her body in motion challenges the buildings’ rigidity, while also suggesting the larger image’s regulatory function. Her bright spot in this understated photograph shoots new life through the largely-obscured men and women wearing white shirts in the background. On closer observation, they are also moving in spaces of their own.

The image’s visual composition forces the question: “What can black South Africans own in this moment?” Perhaps a nicer house, as the government assures, but not the land on which it’s built. Perhaps the house may contain their household, but family members may be split asunder by taxing commutes and long work hours, required to pay rent and buy overpriced goods. Amidst these conditions, the girl stands out. Launching forward in motion, she calls attention to her presence and that of those around her recorded by the photograph.

On the one hand, Cole’s photographic eye seems to reach for ownership of his own dispossession. “At least this, if nothing else,” the photograph seems to say, as its eerily smoothed background gestures at how black freedoms were vanishing, and thereby at a lived reality in which black freedoms were missing. On the other hand, the girl provides the point of contrast upon which such revelations can be made. She, and the other people occupying these spaces, do not offer clear representation through the photograph. Cole shows, through the visual trail blazed by this young girl, that a life can and does matter, and that the lives led by black residents were unwieldy in ways that defied the system’s logics.

Serin Lee (AB’21), was an Undergraduate Research Associate for Photography in spring and fall 2020 at the Smart Museum. She is an English and Creative Writing double major, whose areas of interest include poetry and poetics, multilingualism, film, and visual culture. 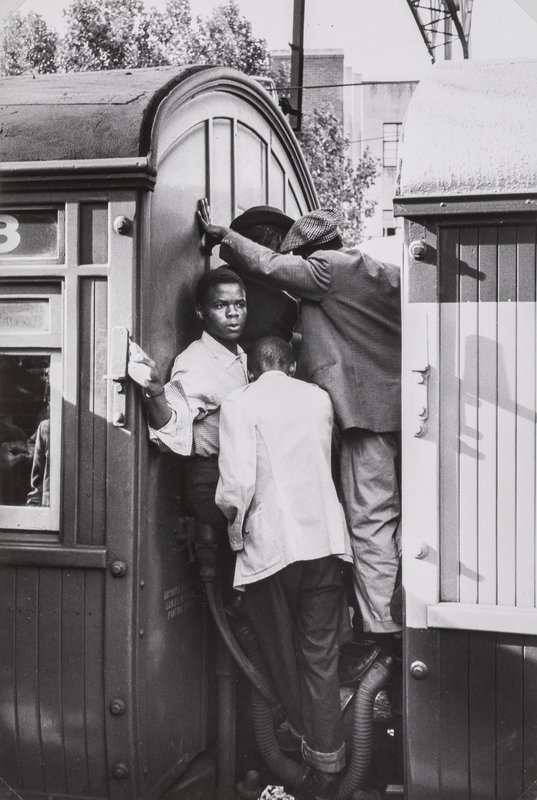 Ernest Cole, From "House of Bondage," 1960s, Gelatin silver print. Smart Museum of Art, The University of Chicago, Gift of the Estate of Lester and Betty Guttman, 2014.225. 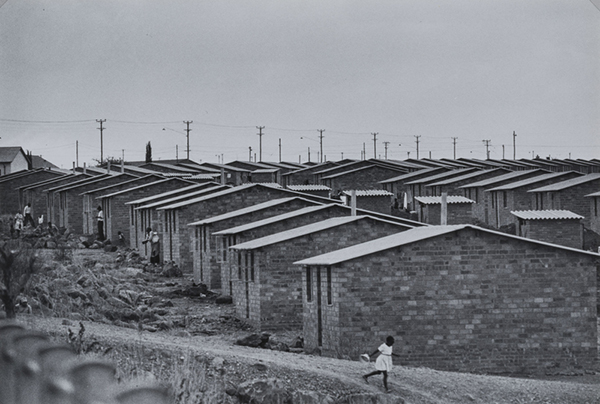 Ernest Cole, From "House of Bondage," 1960s, Gelatin silver print. Smart Museum of Art, The University of Chicago, Gift of the Estate of Lester and Betty Guttman, 2014.224.