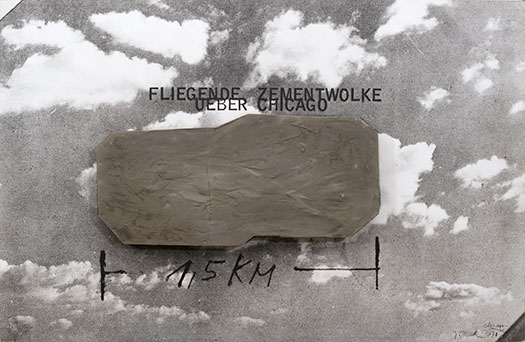 In the late 1960s and early 1970s, Fluxus co-founder Wolf Vostell (1932–1998) used concrete as an actual material and an artistic motif in a surprising, unique body of work that includes the colossal sculpture Concrete Traffic.

During this time, Vostell mobilized concrete’s ambivalent connotations of permanence and inflexibility, strength and violence, to engage with postwar urbanism, particularly German reconstruction and American urban renewal; with unrest and war, including the civil rights marches in Selma, the Paris student protests, the Vietnam and Cold wars; and with the international, if not yet global world, particularly as manifest in transatlantic travel, postcards, and the Munich Olympics.

Vostell Concrete is animated by questions of why the materials of art making matter and how they signify. It features the artist’s little known, first uses of concrete and redresses a too-limiting understanding of Vostell as a mere performance artist or belated German Pop artist. Drawn from the Smart Museum and other local, national, and international collections, the nearly 50 works on view span a variety of media, from sculpture to film, performance, collage, watercolor, and printmaking.

The exhibition is part of Concrete Happenings, a collaborative series of public exhibitions, screenings, symposia, and happenings that mark the return of Vostell’s colossal Concrete Traffic (1970) to public view following a major conservation effort. The sculpture—a 1957 Cadillac encased in concrete—is part of the University of Chicago’s public art collection and will be sited in a parking garage in the immediate vicinity of the Smart Museum beginning in fall 2016.

“In some cases, Vostell capitalized on concrete’s innate bulkiness and impenetrability. But in others, as the Smart Museum of Art exhibition makes clear, he ignored or defied its physical properties, seeing the material as a kind of all-purpose elixir.”—Kyle MacMillan, Art in America

“Vostell’s experiments with concrete are a formally stunning exploration of a material that defined the shape of the twentieth century—its everyday urban experience—like few others.”—Christine Mehring, Artforum

“What Vostell did with concrete is intensely weird. He used it to fully encase a Bofinger chair, the first mass-producible one-piece plastic seat; an Opel Kapitan, a German-made executive car; an entire shop counter from a butcher in the city of Bochum; his own artist book, rendering it unreadable and 20 pounds heavy; part of a train car; and parts of the human body.”—Lori Waxman, Chicago Tribune

Documentary tells the story behind the conservation of Wolf Vostell's Concrete Traffic. After decades exposed to the elements, a team of art historians, conservators, engineers, and others undertook a conservation project that culminated with the return of the sculpture to the University of Chicago in fall of 2016.

On September 30, 2016, Wolf Vostell's concrete-covered Cadillac returned to the University of Chicago during a public procession that traced the history of the colossal sculpture.

Lynne Warren and Christine Mehring discuss the history of Wolf Vostell's Concrete Traffic at the Museum of Contemporary Art Chicago on September 30, 2016.

This exhibition has been made possible in part by the Smart Museum’s Pamela and R. Christopher Hoehn-Saric Exhibition Fund, Amy L. Gold, the Graham Foundation for Advanced Studies in the Fine Arts, Charline von Heyl and Christopher Wool, and SmartPartners.