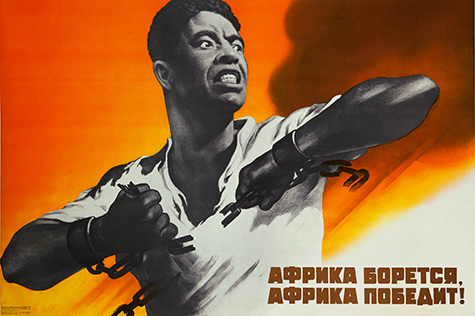 The Soviet artist and designer Viktor Koretsky (1909–1998) created aggressive, emotionally charged images that articulated a Communist vision of the world utterly unlike that of conventional propaganda.

Koretsky's captivating scenes of survival and suffering were designed to create an emotional connection between Soviet citizens and others struggling for civil rights and independence around the globe. This vision of a multicultural world of shared sacrifice offered a dynamic alternative to the sleek consumerism of Madison Avenue and the West and, according to the curators, can be thought of "as a kind of Communist advertising for a future that never quite arrived."

Drawing on an extensive private collection of Soviet art and propaganda, this exhibition presents nearly ninety of Koretsky's posters, photographs, and original maquettes. It is the first major museum exhibition in the United States to focus on Koretsky, who remains largely unknown in the West.

Together with a publication that explores the dissident public culture nurtured in the Soviet bloc and a screening of films by Aleksandr Medvedkin and Chris Marker, Vision and Communism offers a striking new interpretation of visual communication in the USSR and beyond.

The exhibition's themes are extended to cinema through screenings of the militant films of Aleksandr Medvedkin and Chris Marker at the University of Chicago's Film Studies Center.

In 1967 the French filmmaker Marker happened upon Medvedkin’s 1935 film satire Happiness and discovered for the world a lost giant of Soviet cinema. Featuring several films that have rarely, if ever, been shown in the United States, the screenings explore how Soviet vanguard cinema provided a model for Marker’s insurgent, grass-roots filmmaking in the West.

Learn more about the film series

A daylong public symposium that examines art and political agitation, held on October 14, 2011.

The exhibition is accompanied by a catalogue that presents a series of interconnected essays devoted to Viktor Koretsky’s art and the social worlds that it hoped to transform. Produced collectively by the exhibition curators, the book is published by The New Press.

Join an array of Chicago arts institutions for The Soviet Arts Experience, a city-wide showcase exploring the art and culture of the Soviet Union.

Lunch-hour Talk:
Empire of Liberation? The Soviet Union, US, Race Relations, and the Cold War
November 2, 2011