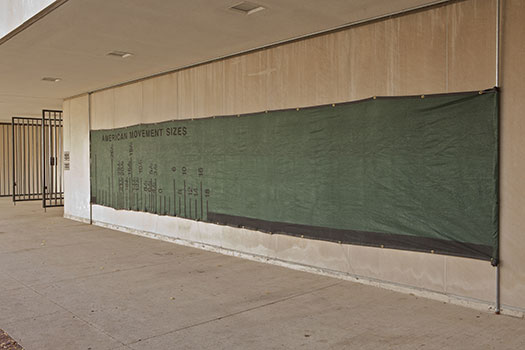 In her new site-specific work commissioned for the Smart’s courtyard, Valerie Snobeck (University of Chicago MFA 2008) re-uses construction material to open up broad questions about aesthetics, value, and the built environment.

American Standard Movement centers on debris netting that was previously used in a building project on the University of Chicago’s campus. Such netting serves a function—to catch debris let loose by construction activities—and also behaves as an aesthetic marker of the construction site itself. Snobeck’s work takes this duality as a point of entry. Netting marks the absence of a wall, but is, unlike a wall,woven and hung, permeable.

In American Standard Movement, the netting is co-opted, but not necessarily displaced.

Snobeck’s interest in the language of structure extends beyond narratives of the material's past use, and connections to nearby projects to renovate old buildings or erect new structures. The netting contains the space of the wall and holds it within frame—at the same time the netting relies on the wall as its support. As in much of her recent work, the artist considers the limits of both visibility and production, and a structure of reliance between work and context: "What is it that we are building? What are we rebuilding? What existing structures are we using for support?"

The language and marks painted on Snobeck’s banner refer to specific information printed on a tool used in watch repair to measure internal components. American Standard Movement suggests a relationship between body and environmental space as component parts; questioning moves to inscribe the future with speculative values, fixed measurements or meanings.

The Threshold series brings a major installation of contemporary art to the Smart Museum’s reception hall and sculpture garden each year, ensuring that all visitors—whether they have come to the building for a class, an exhibition, or a cup of coffee—will instantly encounter new art.

Presented in the Vera and A.D. Elden Sculpture Garden