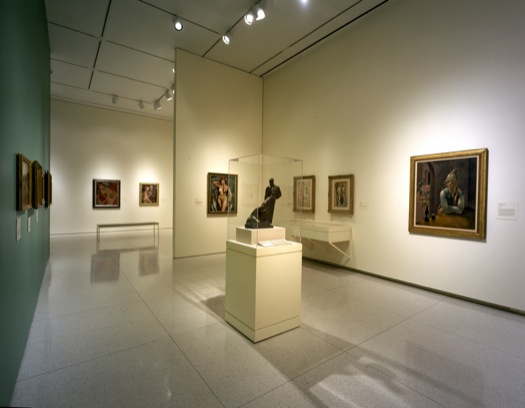 By 1890, a century of occupation and several failed uprisings had impacted Polish culture profoundly, engendering a broad search for a national identity in the arts.

Driven by the Mloda Polska (Young Poland) movement, Polish art, literature, architecture, and music flourished even as the country remained partitioned under the foreign rule of Russia, Germany, and the Austro-Hungarian Empire. Inspired by encounters with foreign art practices, the work of Polish artists responded to the Symbolism and Synthetism of the 1890s, the Cubism of the teens, and the Neo-Classicism of the 1920s.

Though disparate in the styles they practiced, the artists united in their pursuit to create a modern art from a uniquely Polish perspective. Some Polish painters and sculptors remained in their native land, including members of Krakow's influential group, Sztuka (Art). Others – some forced into exile but most leaving by choice – worked abroad, residing in Paris, Munich, and other artistic centers across Europe.

These developments inspired a lively international exchange and resulted in a Polish modernist art movement that was remarkably diverse. With more than sixty paintings, sculptures, and drawings, all on loan from the private collection of Tom Podl, The Colors of Identity traced the complex expression of national identity and international perspective that define this critical period of Polish modern art.

Artur Tanikowski, an art historian at the Academy of Fine Arts in Warsaw, and Anna Król, Curator at the Manggha Centre of Japanese Art and Technology in Krakow and former vice-director and former curator at the National Museum in Krakow, in consultation with Richard A. Born, Smart Museum Senior Curator.

The exhibition was organized by the Smart Museum of Art and featured selections from the collection of Tom Podl, Sammamish, Washington. The exhibition and related programs were supported in part by LOT Polish Airlines and the Center for East European and Russian/Eurasian Studies, University of Chicago.