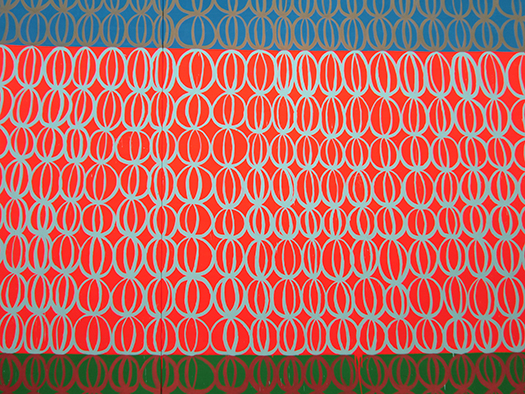 Judy Ledgerwood, detail of Chromatic Patterns for the Smart Museum, 2013, Tempera. Courtesy of the artist and Rhona Hoffman Gallery, Chicago.

Chicago-based artist Judy Ledgerwood’s immense, site-specific wall painting for the Smart Museum is part of an ongoing series inspired by the energetic, asymmetrical rhythms of composer Morton Feldman’s Patterns in a Chromatic Field (1981).

The painting is comprised of horizontal bands of boldly colored patterns—blue with bronze, fluorescent red with mint green, spring green with copper—that run across the large central wall in the Smart’s lobby. The work responds to both the soaring, symmetrical architecture of the space and, in its repeating patterns, the design of Louis Sullivan’s elevator screens for the Chicago Stock Exchange building (two of which are on view in the lobby).

The artist (with the help of an assistant) painted Chromatic Patterns by hand directly on the wall. The work, in the artist’s words, is made to "hang tapestry-like" with drooping and irregular edges that contrast with the clean lines of the Museum’s modernist architecture.

The Threshold series brings a major installation of contemporary art to the Smart Museum’s reception hall and sculpture garden each year, ensuring that all visitors—whether they have come to the building for a class, an exhibition, or a cup of coffee—will instantly encounter new art.

Judy Ledgerwood talks about the creative jump from making a small study on paper to executing a wall-sized painting.

The artist shares what it is like to work on site and discusses the relationship between architecture and painting.