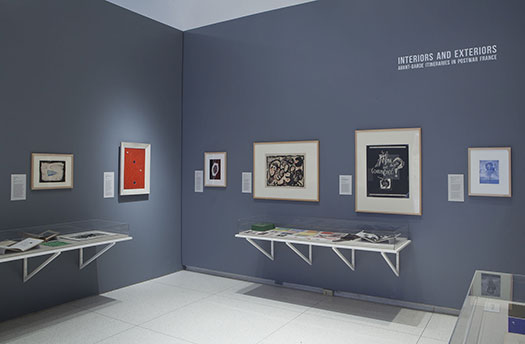 This exhibition traced the relationship between the emerging generation of avant-garde movements in 1950s France and the surrealist movement, re-established in Paris after the war.

The social milieu of the Left Bank offered rich material for artists to map social and psychological experience by tracing quotidian itineraries and social interactions. These contesting visions of the relationship between interior and exterior life in art represent a tense exploration of the location of the personal and the political within reconstruction-era France.

Interiors and Exteriors featured an array of artworks and artists’ publications from the Smart’s collection as well as the University of Chicago and Northwestern University libraries. A related film, performance, and lecture series explored these topics throughout the year.

January 23, 2014, 5–8 pm
Get Lost! Avant-Garde Itineraries at the University of Chicago

Jennifer Cohen and Marin Sarvé-Tarr, PhD students in Art History at the University of Chicago, in consultation with Anne Leonard, Smart Museum Curator and Associate Director of Academic Initiatives.

This exhibition is made possible by an endowment from the Andrew W. Mellon Foundation. The exhibition and related programs are supported in part by the France Chicago Center, the Uncommon Fund, the Arts Council, the Franke Institute for the Humanities, and the Norman Wait Harris Fund at the University of Chicago.

Presented in the Joel and Carole Bernstein Gallery for Special Projects