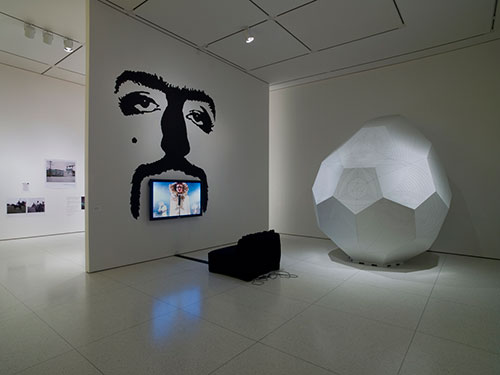 Throughout the vast interior of the United States, contemporary artists are responding to the world around them and reshaping it in unexpected ways.

Organized by the Smart Museum of Art and the Van Abbemuseum, one of Europe’s premier contemporary art institutions, this exhibition offers an idiosyncratic look at the innovative forms of artistic creation taking place in the American Heartland.

Together with an extensive series of programs and lectures, Heartland challenges our understandings of place, community, and the role of contemporary art in our changing world.

In 2007 and 2008, the Heartland curators, eschewing traditional research methods, set out on a series of old-fashioned road trips through the vast center of the United States. These research trips informed two distinct exhibitions. The first presentation, which opened in October 2008 at the Van Abbemuseum in the Netherlands, sought to uncover new ways of thinking about the American interior during the U.S. presidential election and gave European audiences access to a broad survey of the Heartland’s culture, art, and music. The second, reconceived presentation at the Smart Museum, offers U.S. audiences a more focused look at the ideals of resourcefulness and invention that permeate the Heartland. Together, the two presentations offer a richly layered reading of a region that has too often been overlooked.

Explore a map of the Heartland, with information on the exhibiting artists, their works, and a representative sampling of artist-run initiatives throughout the region.

View the Heartland in a larger map.

Much more than an art catalogue, the Heartland publication includes interviews and illustrated essays on an eclectic mix of topics.

Major funding for the Smart Museum's presentation of Heartland was provided by Janis Kanter and Thomas McCormick and the Kanter Family Foundation. Generous support was also provided by the Elizabeth F. Cheney Foundation and the University of Chicago's Arts Council. Major support for the Heartland project was made available by Mondriaan Stichting, Amsterdam, the Netherlands.

Presented in the Richard L. and Mary Gray Gallery and the Robert and Joan Feitler Gallery