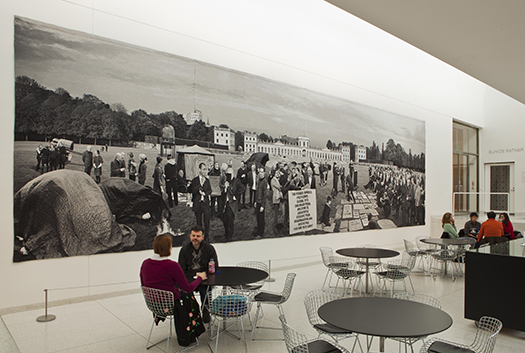 Installation view of Goshka Macuga, Of what is, that it is; of what is not, that it is not, 2, 2012, Courtesy of Andrew Kreps Gallery, New York; Kate McGarry Gallery, London; and Galerie Rüdiger Schöttle, Munich. Commissioned and produced by dOCUMENTA (13) with the support of the Fiorucci Art trust, London, and Outset Contemporary Art Fund, London.

Of what is, that it is; of what is not, that it is not is a two-part work commissioned for the recent dOCUMENTA (13). It is comprised of two photo-based black-and-white tapestries that are to be exhibited simultaneously but never together in the same place.

Part 1, originally shown in Kassel, Germany and presented at the MCA as part of the survey Goshka Macuga: Exhibit, A (December 15, 2012 to April 7, 2013), depicts a diverse crowd of Afghans and Westerners in front of Darul Aman Palace outside of Kabul, Afghanistan.

Part 2, originally exhibited in Kabul, and on view in the Smart's reception hall, shows an art-world crowd and protesters gathering outside of the Orangerie in Kassel. Both scenes are conceived as complementary halves of an elusive truth.

This is the first time the diptych will be shown in separate art institutions within one city; the exhibition at the MCA marks the artist’s first museum survey in the United States.

Organized by Dieter Roelstraete, Manilow Senior Curator at the Museum of Contemporary Art Chicago, with the Smart's presentation overseen by Stephanie Smith, Deputy Director and Chief Curator at the Smart Museum of Art.