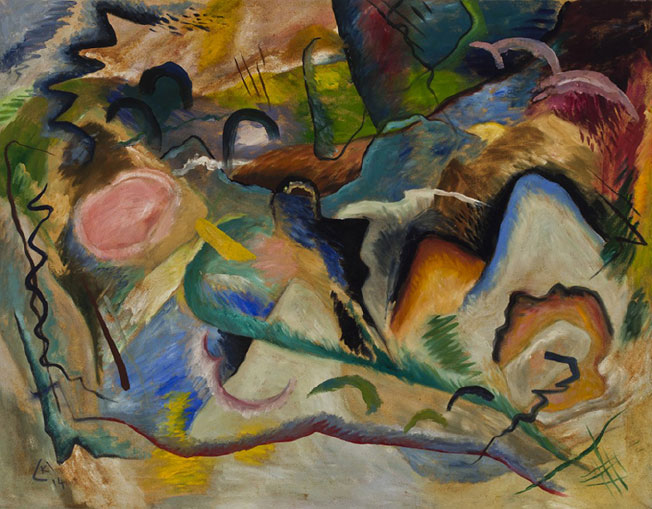 Attributed to Wassily Kandinsky, Composition, 1914, Oil on canvas. Smart Museum of Art, The University of Chicago, Gift of Dolores and Donn Shapiro in honor of Jory Shapiro, 2012.51.

In the years before World War I, Expressionism was a term vanguard art circles in France, Germany, and Central Europe used to denote various modern art movements that arose after Impressionism.

Whether figurative or abstract, pre-war Expressionism was foremost anti-naturalist in style and idealist in content. Utilizing simplified forms, distorted details, and unnatural colors, Expressionist artists sought to penetrate to the essence of outer appearances to elicit an emotional response from the viewer. For such artists, exaggeration expressed their inner responses to the visual world around them, whether in the service of utopian idealism or to rebut contemporary social mores and injustices.

Spanning a century of momentous and rapid political, social, and economic change, this exhibition charts the ebb and flow of key Expressionist tendencies in German and Central European art from, among other countries, Czechoslovakia, Poland, and Romania.

The incisive, often emotionally charged paintings, drawings, and sculptures on view—mounted from the Smart’s collection and supplemented by select promised gifts—bear powerful witness to periods of war, utopian dreams, economic depression, political division, and personal and political exile. No single style, technique, or theme dominates. Rather, Expressionist Impulses offers a fluid account of multiple waves of artists who were concerned with stylistic innovation bent in the service of social and political critiques.

The exhibition includes approximately 80 works and is divided into loosely chronological sections that cover major Expressionist moments in Germany: Die Brücke (1905–1914), Der Blaue Reiter (1911–1914), New Objectivity (1920s), and Neo-Expressionism (1960–80s). It also brings to the surface often overlooked international connections to modernism and the expressive impulse in avant-garde artists active across the great art centers of Germany and the Austro-Hungarian Empire before the rupture of The Great War and in a divided Germany and Communist Europe throughout the Cold War.

This hybrid hash, this metaphysical meatloaf called Expressionism, was hacked out of the flesh of Cubism and Futurism” 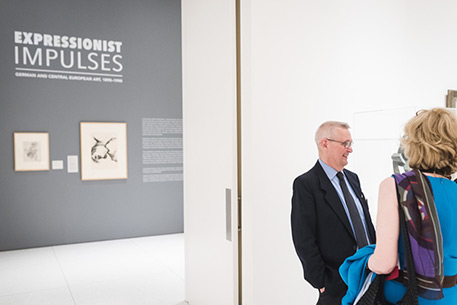 After 35 years as a curator at the Smart Museum of Art, Richard A. Born will retire at the end of December.

Support for this exhibition and its programming has been provided by the Smart Museum’s Pamela and R. Christopher Hoehn-Saric Exhibition Fund, Nuveen Investments, the Consulate General of the Federal Republic of Germany, the University of Chicago’s Arts Council, the Franke Institute for the Humanities, and the Center for Interdisciplinary Research on German Literature and Culture.

Presented in the Richard and Mary L. Gray Gallery