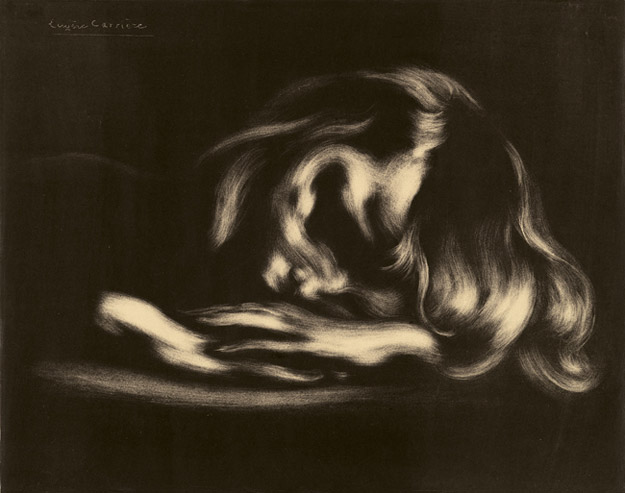 In the second half of the nineteenth century, Paris reigned as the city of light and Impressionism captured the bustle of its lively streets and cafés. But there is another dimension to the period, one captured by less well known, sometimes enigmatic, and often melancholy imagery.

This was the art of collectors who kept prints, drawings, and small sculptures under wraps, compiled in albums and portfolios or stored away in cabinets. While often unsuitable for more public display, such works were avidly collected and viewed discreetly on chosen occasions.

Organized by the National Gallery of Art, Washington, The Darker Side of Light reveals the private worlds of late nineteenth-century Europe through prints and other works meant for quiet contemplation.

Within the intimate setting of the Smart Museum's galleries, The Darker Side of Light evokes shadowed interiors and private introspections to tell a far less familiar story of late nineteenth-century art.

The Dark Mirror: Writing from the Interior Image
February 13, 2010

The Darker Side of Light: Arts of Privacy, 1850–1900 is curated by Peter Parshall, Curator of Old Master Prints at the National Gallery and an alumnus of the University of Chicago. The Smart Museum’s presentation is overseen by Anne Leonard, Smart Museum Curator and Mellon Program Coordinator.

The exhibition is organized by the National Gallery of Art, Washington. The Smart Museum’s presentation is generously supported by Nuveen Investments.