Beyond Green: Toward a Sustainable Art 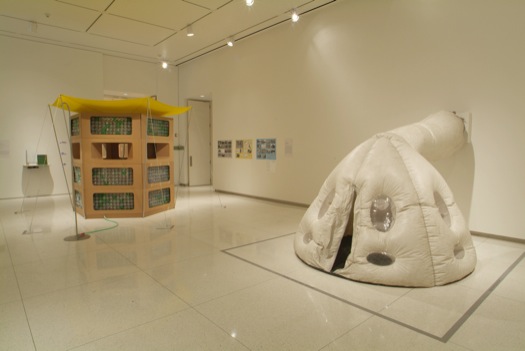 Sustainable design attempts to meet the needs of the present without compromising those of future generations.

Balancing environmental, social, economic, and aesthetic concerns, sustainable design has the potential to transform everyday life and is being enacted around the world in large and small ways not only by architects and designers but also by growing numbers of activists, corporations, policymakers, and possibly even your next-door neighbors.

The exhibition included existing works, commissions, and previously presented work that had been "recycled" spotlighting ways in which artists are building paths to new forms of practice.

Featuring artist interviews and essays, the exhibition catalogue introduces a new generation of international artists who work at the intersection of sustainable design and contemporary art.

Beyond Green was co-organized by the Smart Museum of Art, University of Chicago, and iCI (Independent Curators International), New York, and circulated by iCI. This exhibition was curated by Stephanie Smith, Smart Museum Curator of Contemporary Art.

This exhibition and accompanying catalogue were made possible in part by the Smart Family Foundation; the Horace W. Goldsmith Foundation; the Richard H. Driehaus Foundation; and iCI Exhibition Partners Kenneth S. Kuchin and F. Bruce Anderson, and Gerrit and Sydie Lansing. Additional support was provided by the Arts Planning Council, the Environmental Studies Program, and the Green Campus Initiative, University of Chicago. Related programs in Chicago were made possible with additional support from the Chicago Architecture Foundation.