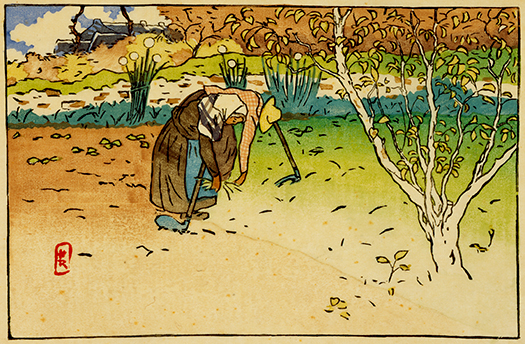 The rise of color printmaking in France in the late nineteenth century is often attributed to a fascination with Japanese woodblock prints, which began to circulate in great numbers after the opening of Japan in 1854.

But a closer look at the history of color printmaking in these two cultures reveals that the story is not so simple. Parallel traditions were flourishing in both France and Japan well before 1854. And, when the two cultures met, the channels of technical and aesthetic influence flowed in both directions, not merely from East to West.

Embracing these complexities, Awash in Color explores the roles, functions, and technology of color in French and Japanese prints. It features more than one hundred and thirty prints and illustrated books dating from the eighteenth to twentieth centuries, drawn from the Smart Museum’s substantial holdings as well as major public and private collections across the country. These exquisite works reveal two unfolding traditions—each shaped by artistic experimentation and technological progress—that came to complement each other aesthetically, even while preserving their own distinctive features.

“The prints in Awash in Color overflow with inventiveness, great design, and beautiful representations of the people, landscapes, and manners of their time”

The exhibition is accompanied by a catalogue incorporating essays and entries by leading print scholars and art historians. The volume will trace the history of color printing in a comparative cultural context.

Lecture and Recital:
Claude Debussy and the Visual Arts
October 20, 2012

This exhibition is one in a series of projects at the Smart Museum of Art supported by an endowment from the Andrew W. Mellon Foundation.

Major funding is provided by the University of Chicago Women's Board and The Samuel H. Kress Foundation, with additional support generously provided by Ariel Investments, The Elizabeth F. Cheney Foundation, The IFPDA Foundation, and Thomas McCormick and Janis Kanter.

Related programming is made possible by the University of Chicago’s France Chicago Center, Department of Music, and Department of Art History as well as Mrs. Betty Guttman. Additional funding for the catalogue was provided by Furthermore: a program of the J.M. Kaplan Fund.