Adrian Piper: The Mythic Being 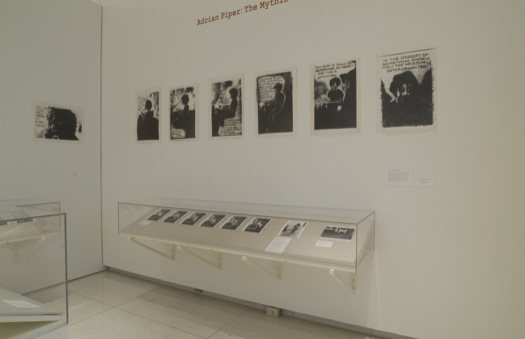 In 1973, Adrian Piper created an alter-ego, the Mythic Being, who became the basis of a pioneering series of performances and photo-based works.

Piper—a light-skinned woman of mixed racial heritage—transformed herself into the Mythic Being by donning an Afro wig, sunglasses, and mustache and adopting behavior conventionally identified as masculine. She then explored how she and others responded to the Mythic Being. In the process, she transformed the conceptual art practices common in the period, infusing them with strong personal and political content.

This exhibition gathered together works from all facets of the Mythic Being project, including major work from the Smart Museum's collection and selections from the Adrian Piper Research Archive, some of which document private performances of the Mythic Being never before publicly presented.