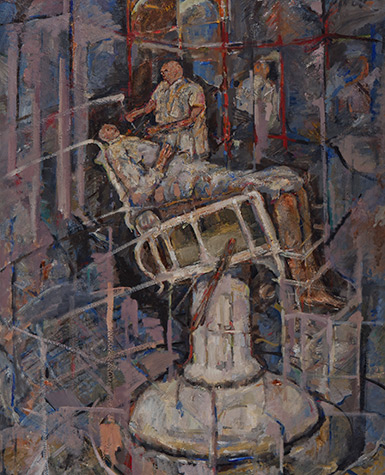 The years following World War II were marked for many as a time of growing unrest and anxiety.

The burgeoning Cold War and McCarthyism were shaping the country’s political climate, while the growing Civil Rights Movement was beginning to reveal the vast and brutal injustices faced by persons of color in America. Perhaps most emblematic of their times, Chicago artists associated with the Monster Roster employed a figurative style imbued with deep, and often dark, psychological tones portraying what one critic referred to as “the figure under stress.”

This panel convenes writers, curators, historians, and artists to plumb the social, political, and cultural context of postwar Chicago, to better understand what contributed to the making of the Monster.

Free, but space is limited. Please register in advance.

Thomas Dyja
Author of The Third Coast: When Chicago Built the American Dream
Due to unforeseen circumstances, Thomas Dyja will no longer be able to participate in the panel discussion

Seymour Rosofsky, Patient in Dentist's Chair (detail), 1961, Oil on canvas. Smart Museum of Art, The University of Chicago, Gift of the Rosofsky Estate, 2014.16.