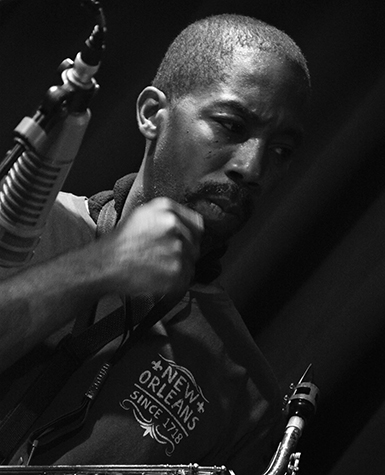 The Fred Jackson, Jr. Quartet performs in the Smart Museum’s courtyard as part of the Hyde Park Jazz Festival, a weekend of free performances at cultural venues across the neighborhood.

Visit hydeparkjazzfestival.org for the complete schedule, safety guidelines, and other information.

Fred Jackson, Jr.’s life has been a dedication to music. He began playing the saxophone in 7th grade and has been following the path of jazz ever since. This path has mirrored the great jazz migration—beginning with a move from Texas to Baton Rouge, where he studied with world-renowned jazz clarinetist Alvin Batiste and became the first graduate of Batiste’s A.A. in Jazz Studies, meanwhile sharing the stage with greats including Kafele Bandele, The Mike Foster Project, Troy Davis, Mark Whitfield, Lashawn Gary, Roland Guerin, Donald Edwards, Nicholas Payton, Brice Winston, Alvin Batiste, Doja Composure, Quamon Fowler, and Wes Anderson.

After receiving his Bachelor’s degree from Southern University, Jackson continued migrating—this time to Chicago, where he jumped into the scene right away, playing at The Apartment Lounge with Von Freeman and the Velvet Lounge with Fred Anderson—and that was just the beginning. Soon, he would be spending time and playing with “all the cats,” including Vincent Davis, Maggie Brown, Magic Carpet, Jimmy Bennington, Carrazz/Pati, Crosswinds, Corey Wilkes, Harrison Bankhead, Avreeayl Ra, Perry Wilson, Saalik Zyiad, and others.

In 2010, he became a member of AACM; went to Poznań, Poland on a Made in Chicago tour; played at the MCA in the first inaugural band of The Bridge; and traveled to Germany with the AACM New Generations ensemble. In 2012, he went back to school, where he studied with Mark Colby, Dana Hall, Dr. Robert Lark, and Tom Matta, and received a Master’s in Jazz Studies from DePaul. He has studied the music of the African diaspora extensively, and had the honor of performing with some of Ethiopia’s finest musicians, including Abonesh Sedinew, Tigist, and Teddy Akililu.

Jackson teaches at St. Symphorosa and St. Mary’s Star of the Sea School. He also works on his newest venture, the Spacetronic Music label, and plays with sitarist Shanta Nuerulla and his band Erudition Project. He was recently awarded a Fresh Works, New Voices grant from the Jazz Institute of Chicago.