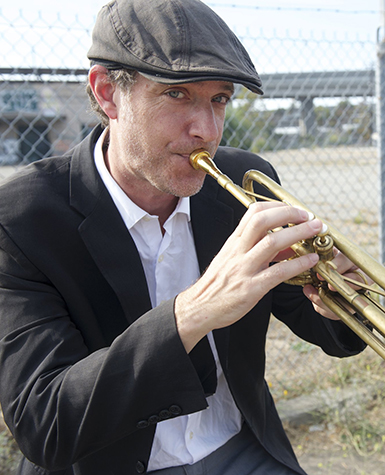 Darren Johnston’s Life in Time performs in the Smart Museum’s courtyard as part of the Hyde Park Jazz Festival, a weekend of free performances at cultural venues across the neighborhood.

Visit hydeparkjazzfestival.org for the complete schedule, safety guidelines, and other information.

Canadian born trumpeter/composer Darren Johnston hails from the Bay Area and currently lives in Brooklyn, but visits Chicago regularly to perform and record. This often means performing in the quartet, Life in Time, alongside local titans Geof Bradfield, Clark Sommers, and Dana Hall. Back in New York, he plays with the trio Breathing Room and the quintet Wide Awake. He’s also a member of an all-Canadian collective quartet.

Johnson is drawn to music that defies characterization, and he performs not only all styles of jazz but also purely improvised music, new music, and various other kinds of traditional music, including those of the Balkans, Greece, and Macedonia. He is generally open to further suggestions.