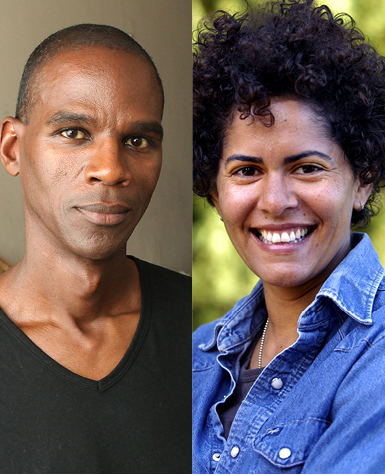 Mark Bradford and Julie Mehretu are internationally acclaimed artists who explore the natural and built environment, imagined spaces, and urban geography. Their artwork reveals the complex and overlapping systems that shape public spaces and the ways in which race and class impact the layout of our cities.

Join us live for a virtual conversation with the artists followed by an audience Q&A. The event is moderated by Romi Crawford.

FREE, open to all. Join in via Zoom, Passcode: SAICVAP

This program is presented by the School of the Art Institute of Chicago’s Visiting Artist Program partnership with the Smart Museum of Art at the University of Chicago, in conjunction with Toward Common Cause: Art, Social Change, and the MacArthur Fellows Program at 40.

Mark Bradford (b. 1961 in Los Angeles) is a Los Angeles–based contemporary artist best known for his large-scale abstract paintings created out of paper. Bradford builds up layers of papers and other materials that he has collected from everyday life, creating thick surfaces that he then lacerates, erodes, and excavates using “tools of civilization” to reveal intersections between the layers of signifying materials. Referred to frequently as “social abstraction,” Bradford’s work is rooted in his understanding that all materials and techniques are embedded with meaning that precedes their artistic utility. His signature style developed out of his early experimentation with end papers, the small, translucent tissue papers used in hairdressing. He has since experimented with other types of paper, including maps, billboards, movie posters, comic books, and “merchant posters” that advertise predatory services in economically distressed neighborhoods. Bradford’s work explores social and political structures that objectify marginalized communities and the bodies of vulnerable populations. Just as essential to Bradford’s work is a social engagement practice through which he reframes objectifying societal structures by bringing contemporary art and ideas into communities with limited access to museums and cultural institutions.

Bradford has exhibited to acclaim internationally. Recent solo exhibitions of his work include End Papers (2020), a historic survey exhibition of his early paintings at the Modern Art Museum of Fort Worth; Cerberus, Hauser & Wirth, London (2019); and Los Angeles, Long Museum West Bund, Shanghai (2019). In 2017, Bradford represented the United States at the 57th Venice Biennale with his solo exhibition Tomorrow is Another Day. Complementing the presentation at the US Pavilion, and in keeping with his practice to engage marginalized communities, Bradford launched Process Collettivo, a six-year partnership with the Rio Terà dei Pensieri social cooperative that provides skills training and employment opportunities to incarcerated men and women in and around Venice. Following the biennale, Tomorrow is Another Day traveled to the Baltimore Museum of Art, where Bradford collaborated with Greenmount West Community Center, a community art space offering educational resources to families in Baltimore. Bradford has received numerous awards and honors, including his appointment to the American Academy of Arts and Sciences in 2019, the US Department of State Medal of Arts award in 2014, his appointment as a National Academician in 2013, and a MacArthur Fellowship in 2009.

Julie Mehretu (b. 1970 in Addis Ababa, Ethiopia) is a New York–based artist who explores the palimpsests of history, from geological time to a modern day phenomenology of the social. Her work engages us in a dynamic visual articulation of contemporary experience, a depiction of social behavior, and the psychogeography of space. Mehretu’s work is informed by a multitude of sources including politics, literature, and music. Most recently her paintings have incorporated photographic images from broadcast media that depict conflict, injustice, and social unrest. These graphic images act as intellectual and compositional points of departure; ultimately occluded on the canvas, they remain as a phantom presence in the highly abstracted gestural completed works. Mehretu’s practice in painting, drawing, and printmaking equally asserts the role of art to provoke thought and reflection and express the contemporary condition of the individual and society.

Mehretu’s work has been exhibited extensively in museums and biennials including the Carnegie International (2004–05); Sydney Biennial (2006); Solomon R. Guggenheim Museum, New York (2010); dOCUMENTA (13), Kassel, Germany (2012); Sharjah Biennial (2015); Museu de Arte Contemporânea de Serralves, Porto, Portugal (2017); Kettle’s Yard, University of Cambridge, United Kingdom (2019); and the 58th Venice Biennale (2019). In November 2019, a career survey of Mehretu’s work opened at the Los Angeles County Museum of Art. It has since traveled to the High Museum of Art, Atlanta and the Whitney Museum of American Art, New York, where it is currently on view through August 8. It will then travel to the Walker Art Center, Minneapolis this fall (October 16, 2021–March 6, 2022). Mehretu has received many prestigious awards including an appointment to the American Academy of Arts and Sciences in 2021, the US Department of State Medal of Arts award in 2015, and a MacArthur Fellowship in 2005.

Bradford and Mehretu’s conversation will be moderated by Romi Crawford, PhD, professor in the Visual and Critical Studies and Liberal Arts departments at the School of the Art Institute of Chicago. Her research focuses on formations of racial and gendered identity in relation to American visual arts, film, and popular culture. She is co-author of The Wall of Respect: Public Art and Black Liberation in 1960s Chicago (Northwestern University Press, 2017).