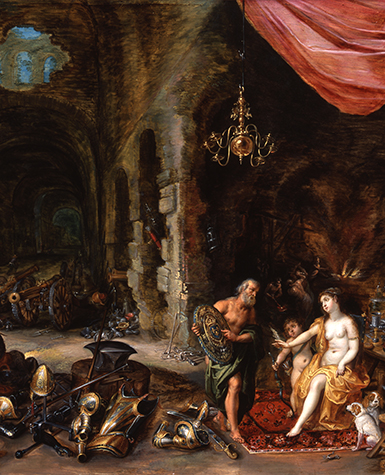 Renaissance historian Ada Palmer explores the relationship between war, strife, and artistic production reflecting on objects in Lust, Love, and Loss in Renaissance Europe as well as other examples of art, music, and literature.

Palmer examines how the artistic splendor of the Renaissance—and the willingness of patrons to invest their fortunes in it—was a reaction to crisis and violence, rather than a sign of peace.

Ada Palmer is a historian focusing on radical thought in Europe especially in the Renaissance. Her current research focuses on history of censorship and patterns in the motives of censors during information revolutions, from printing press to digital. An Associate Professor in the University of Chicago's History Department with affiliations in Classics, Gender Studies, and the Institute on the Formation of Knowledge, she works broadly on the history of science, religion, heresy, freethought, atheism, censorship, books, printing, and long-term European history, especially the Renaissance and Enlightenment. Her first academic book Reading Lucretius in the Renaissance (2014) explores the impact of the rediscovery of classical atomism on the development of modern science and thought. She is also a science fiction and fantasy novelist, author of the award-winning Terra Ignota series (four volumes, beginning with Too Like the Lightning, Tor Books), which explores a twenty-fifth century civilization of voluntary citizenship and borderless nations, written in the style of an eighteenth-century philosophical novel. She writes the history, philosophy and travel blog ExUrbe.com, which hosts her recent essay on the question “If the Black Death caused the Renaissance will COVID-19 cause a golden age?” and her celebrated guide to how to find good gelato anywhere in the world, once featured in The Economist.

Image: Jan Brueghel the Younger and Hendrick van Balen, Venus at the Forge of Vulcan (detail), 1617, Oil on panel. From the Grohmann Museum Collection at Milwaukee School of Engineering.