Given the complexities and varying modes of care, how might we create sites of care that speak to our evolving needs and circumstances?

Join artists engaged with in ℅: Black women, a creative place keeping initiative anchored on the South Side of Chicago, as they discuss connections between art objects from the Smart Museum’s permanent collection and their own artistic practices.

Image: Yaoundé Olu, Mother of Worlds, 1975, Pen and ink on illustration board. Smart Museum of Art, The University of Chicago, Purchase, The Paul and Miriam Kirkley Fund for Acquisitions, 2018.1.

Guillermo Gómez-Peña: An Open Letter to the Museum of the Future 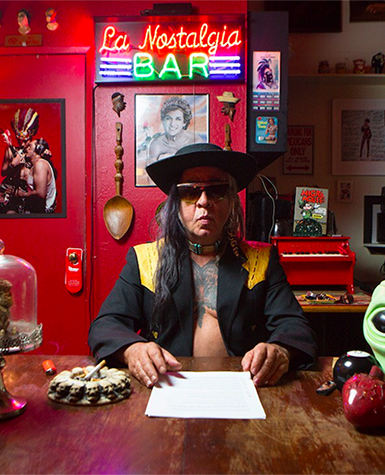 Guillermo Gómez-Peña has an obsession with rewriting and restaging so-called “Western Art History” while highlighting colonial legacies of systematic exclusion, demonization and fetishization of Brown, Black, and indigenous bodies.

This live radio keynote from Gómez-Peña challenges contemporary art museum practices and calls for an open discussion regarding radical restructuring from within. The keynote is part of Gómez-Peña’s Mex Files: Audio Art & Strange Poetry from the US/Mexico Border, a year-long series of experimental audio performances presented by Jane Addams Hull-House Museum, Public Media Institute, and the University of Chicago’s Smart Museum of Art as part of Toward Common Cause: Art, Social Change, and the MacArthur Fellows Program at 40. Later in the series, Gómez-Peña will be joined by invited luminaries in the field who will offer their own responses to the Museum of the Future.

FREE, tune in on 105.5 FM WLPN-LP Chicago and streaming on twitch.tv/lumpenradio.

Guillermo Gómez-Peña (Mexico City, 1968) is a performance artist, writer, activist, radical pedagogue and artistic director of the performance troupe La Pocha Nostra. Born in Mexico City, he moved to the US in 1978, and since 1995, his three homes have been San Francisco, Mexico City and the “road.” His performance work and 21 books have contributed to the debates on cultural, generational, and gender diversity, border culture and North-South relations. Gómez-Peña art work has been presented at more than one thousand venues across the US, Canada, Latin America, Europe, Russia, South Africa and Australia. A MacArthur Fellow, USA Artists Fellow, and a Bessie, Guggenheim, and American Book Award winner, he is a regular contributor to newspapers and magazines in the US, Mexico, and Europe. Gómez-Peña is currently a Patron for the London-based Live Art Development Agency, and a Senior Fellow in the Hemispheric Institute of Performance and Politics. For Gómez-Peña’s archive of performance visit guillermogomezpena.com.