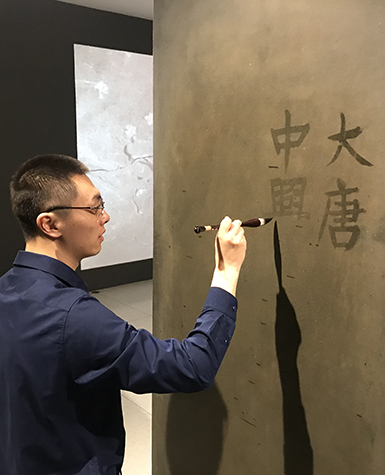 Out of an abundance of caution and in support of evolving public health measures related to the coronavirus (COVID-19), the Smart Museum of Art has temporarily closed and all on site public programs have been suspended until further notice. Read our latest update »

Conghao Tian, an art history MA student studying Chinese and Asian Art at the University of Chicago, will demonstrate the traditional art of Chinese calligraphy as a durational performance. Conghao will, for three hours, slowly copy, from memory, An Ode to the Prosperous Great Tang Dynasty upon Song Dong’s Traceless Stele, on view in the special exhibition The Allure of Matter.

An Ode to the Prosperous Great Tang Dynasty is a famous stone stele carved in 771, the middle of the Tang Dynasty (618–907). The text documents the great deed of Emperor Suzong who pacified the Anshi rebellion, probably the most famous rebellion in the history of China, regained lost cities, and recovered the glory of the dynasty. More famous is the calligrapher who wrote down the text that was later carved into stone. Yan Zhenqing (709–785) is one of the most renowned calligraphers in China. He is known for his solid, solemn, powerful, imposing, yet energetic style, which best captures the aesthetic of the prosperous middle Tang Dynasty. Later critics thought of the Ode to the Prosperous Great Tang Dynasty as the best of all Yan Zhenqing’s works.

Conghao writes, “For young calligraphy learners, this stele is often the beginning point of their life-long practice of copying classic works. I began studying calligraphy when I was about five years old and started studying this stele when I was about seven. In the past seventeen years, I have copied it countless times, and it is still my favorite stele. I choose to perform this stele on Song Dong’s Traceless Stele not only because of its rich history and connection to Song Dong’s work, but also because of my personal attachment to this particular monument.”