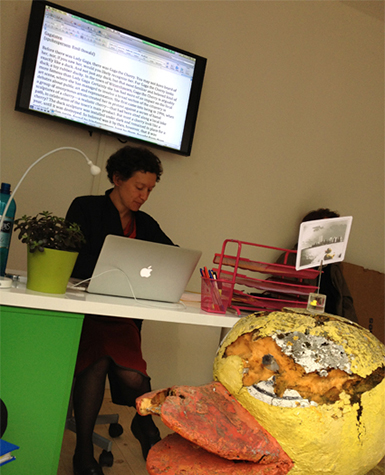 Join Lori Waxman and Rachel Cohen for a discussion about practices—art criticism as a practice of writing about art, art history as an attention to artistic practices, art making as a practice of all sorts of things (walking, cooking, painting, thinking, researching, drawing, etc.).

What does it mean to practice these professions? Is it unprofessional? Waxman will talk about her approach to conventional art reviewing through her decade of work as the primary critic for the Chicago Tribune and her attempts to question some of these norms in her ongoing performance project, the 60 wrd/min art critic. Cohen will raise questions that have come up in teaching writing about the arts at the University of Chicago, and through the Speaking of Art working group on campus. The focus of Waxman’s scholarly work, on walking as an art form, will offer a chance to consider how artists themselves engage in alternate practices, and ways that art historians and art writers can meet them somewhere along the road.

This event is organized by the Feitler Center for Academic Inquiry at the Smart Museum and co-sponsored by the Open Practice Committee in the Department of Visual Arts, Department of Art History, Creative Writing, and the RAVE and Speaking of Art workshops.

Lori Waxman has been the Chicago Tribune’s primary freelance art critic for the past decade. She teaches at the School of the Art Institute of Chicago and has a Ph.D. in art history from the Institute of Fine Arts in New York. Her "60 wrd/min art critic" performance has been exhibited in dOCUMENTA (13) and a dozen cities across the U.S. She has received a Warhol Foundation Arts Writers Grant and a 2018 Rabkin Foundation award, and is the author, most recently, of Keep Walking Intently (Sternberg Press), a history of walking as an art form.

Rachel Cohen is the author of Austen Years: A Memoir in Five Novels (FSG, 2020), Bernard Berenson: A Life in the Picture Trade, and A Chance Meeting: Intertwined Lives of Writers and Artists, winner of the PEN / Jerard Fund Award. Her essays on artists and writers have appeared in publications including the New Yorker, the London Review of Books, Art in America, Apollo Magazine, McSweeney’s and Best American Essays. Cohen is the recipient of a Guggenheim Fellowship, and she is Professor of Practice in the Arts in Creative Writing at the University of Chicago.

Image: In a performance at dOCUMENTA (13) critic Lori Waxman reviews Gaga the Cherry, a work of public art that only looks like a sculpture of a duck, by a group of anonymous artists from Witzenhausen. Photo by Emil Oswald.