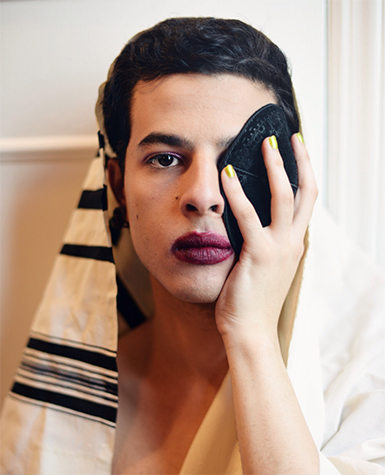 Who we are is profoundly shaped by our relationships with others, particularly the maternal figures in our lives.

In this series of self-representational films, trans artists Zackary Drucker, Chase Joynt, Mx. Enigma, and Vivek Shraya depict themselves through their relationships with mothers, grandmothers, and siblings. Following the tradition of Cindy Sherman and Claude Cahun, these self-portrait films are only possible through collaboration, just like the self emerges through relationality. Featuring Drucker’s Unison (2018) and Southern for Pussy (2015), Mx. Enigma and Hazel Katz’s Bubby & Them (2017), Joynt’s Akin (2012), and Shraya’s Holy Mother, My Mother (2014) and I Want to Kill Myself (2017).

Following the screening, Drucker and Joynt will be in conversation with curator Nicole Morse.

FREE, and open to the public. Doors open a half-hour before the top of the show. Seating is limited and offered on a first come-first served basis unless otherwise noted.

Curated by Nicole Morse (Florida Atlantic University) in conjunction with the Smart Museum’s exhibition Smart to the Core: Embodying the Self, the screening also coincides with the Center for the Study of Gender and Sexuality’s exhibit of Shraya’s self-portrait series TRISHA and the exhibition at Special Collections The Fetus in Utero: From Mystery to Social Media.

Co-sponsored by the Film Studies Center, the Smart Museum of Art, the Department of Cinema and Media Studies, the Karla Scherer Center for the Study of American Culture, and the Center for Identity + Inclusion.

Zackary Drucker is an independent artist, cultural producer, and trans woman who breaks down the way we think about gender, sexuality, and seeing. She has performed and exhibited her work internationally in museums, galleries, and film festivals including the Whitney Biennial 2014, MoMA PS1, Hammer Museum, Art Gallery of Ontario, MCA San Diego, and SF MoMA, among others. Drucker is an Emmy-nominated producer for the docuseries This Is Me, as well as a producer on Golden Globe and Emmy-winning Transparent.

Mx. Enigma (They/Them & Queen) is a multi-disciplinary artist, writer and media maker. They are a nonbinary transfemme of color living in New York City. They graduated Cum Laude at Brooklyn College in 2017 with a B.A in Media/Film & a side concentration in gender, race and sexuality. Their work focuses on the intersections of queerness, American culture & the public’s perception. Their work has been featured in over 40 galleries in nyc including cultural institutions like MOMA, MAD, Bronx Museum, Tribeca Film Festival, HBO & BRIC media. Mx.Enigma was also a title to one of their first short docs about one’s struggle with gender and religion has been a finalist at Tribeca Institute’s spring 2018 film fest “Our City, Our Streets.” They made history in Summer 2018 as the first nonbinary host on an American public tv network on Manhattan Neighborhood Network where they produced 1st season of Queer Justice! a human rights talk show focusing on Global Queer liberation. They are an alum of the BCI artist residency in Summer 2017, UrbanWord NYC Poetry Institute and a Spring 2019 artist in residency at Judson Memorial Church in NYC. They are currently working in collaboration with Theatre of the oppressed and New York Public Library a summer reading of their play production “L’Chaim 2 Dykes” a truthful comedy humanizing the lives of Queer Ex-Hasidic Women who are struggling with their custody battles. Stay tuned for their film adaption.

Chase Joynt is a moving-image artist and writer whose films have won awards internationally (Bangalore, Ecuador, Seattle, Toronto). He is the author of You Only Live Twice (with Mike Hoolboom, 2017) and the forthcoming Conceptualizing Agnes: Exemplary Cases and the Disciplines of Gender(with Kristen Schilt). Joynt holds a PhD in Cinema and Media Studies from York University and is a Banting Postdoctoral Fellow at the University of Chicago.

Vivek Shraya is an artist whose body of work crosses the boundaries of music, literature, visual art, and film. Her best-selling new book, I’m Afraid of Men, was heralded by Vanity Fair as “cultural rocket fuel,” and her album with Queer Songbook Orchestra, Part‑Time Woman, was included in CBC’s list of Best Canadian Albums of 2017. She is one half of the music duo Too Attached and the founder of the publishing imprint VS. Books.