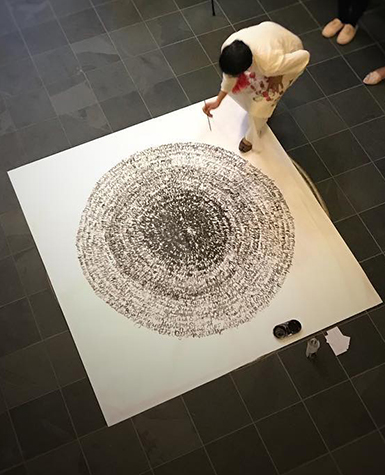 The performance explores the global war on terror through meditative drawing, repetitive news reels, and physical, visual, and sonic movements. It will be followed by a brief discussion with the artists.

The title of the work, Darmiyaan, an Urdu word meaning “center point,” “in the middle,” or “in-between,” marks the site of the performance as both a physical and emotional location. Elahi and Satkunaratnam mark the Smart Museum, the University of Chicago, and the United States of America as sites connected to ongoing practice of violence in the long narrative of the global war on terror.

Working with a wide range of influences for Darmiyaan, Elahi and Satkunaratnum combine tabla beats, Reuters headlines, and drone-strike casualty data to respond to U.S. foreign policy a way that is moving, seductive, and disturbing.

Separately, Elahi and Satkunaratnam have made many works related to the seemingly endless global war on terror and the cyclical nature of violence. With Darmiyaan, their projects intersect in a shared space that spans multiple art forms. Elahi and Satkunaratnam engage in a feminist geopolitics that calls for deconstructing representations of violence and trauma, moving beyond the newspaper headlines and cable news chyrons, and reflecting on the nature of reporting, body-counts, and good-and-evil representations in the so-called war on terror.

Sabba S. Elahi is a multi-disciplinary visual artist, educator, and cultural organizer. Through her artwork she subverts textile and the craft of embroidery to confront representations of dehumanized Muslim bodies, militarism, belonging/nationalism, and personal/collective/inherited trauma.  Over the past year Elahi’s work has been exhibited at Prizm Art Fair Miami, Dittmar Memorial Gallery, Northern Illinois University, and will be featured in a group exhibition at the Museum of Design in Atlanta.  She is at work on a communal embroidery and sound project to commemorate the names of women and children who have died by U.S. drone strikes inside Pakistan. Sabba Elahi received her M.F.A. from the School of the Art Institute of Chicago.

Ahalya Satkunaratnam is a dancer and dance scholar who teaches cultural studies at a small liberal arts college in Canada. Her forthcoming book, “Moving Bodies, Navigating Conflict” on dance practice and war in Colombo, Sri Lanka will be published with Wesleyan University Press in 2019.  Ahalya earned her BA in Political Science at Loyola University Chicago and her PhD in Critical Dance Studies at the University of California, Riverside. Although she lives in Vancouver, BC at the moment, she is a Chicagoan at heart.