Twenty-eight MacArthur Fellows selected for Toward Common Cause

Twenty-eight MacArthur Fellows have been selected to participate in Toward Common Cause: Art, Social Change, and the MacArthur Fellows Program at 40, an expansive multi-venue exhibition organized by the Smart Museum of Art at the University of Chicago in collaboration with more than two dozen exhibition, programmatic, and research partner organizations across Chicago. The exhibition, which celebrates the 40th anniversary of the MacArthur Fellows Program, will encompass a broad spectrum of contemporary artistic practice, including community-based projects realized in public spaces as well as solo and group presentations in multiple museum, gallery, and community spaces. The full list of participating artists is below and online at the exhibition website, towardcommoncause.org.

“This project began three years ago with a sense of purpose that has only grown more urgent. Art is a vital social resource, especially in times defined by division, pandemic, and vitriol. In the midst of multiple calamities, I have been afforded the unimaginable privilege of working with this group of artists as they met and mentored youth, forged alliances to confront the disproportionate impacts of environmental pollution, and prepared to share their creative vision with all of us across Chicago. Their work has kept me from giving in to despair and offers a daily reminder that there is beauty and goodness in the world, that individual and collective action can change people’s lives,” said Abigail Winograd, MacArthur Fellows Program Fortieth Anniversary Exhibition Curator at the Smart Museum.

Toward Common Cause will open in summer 2021. The exhibition uses the idea of “the commons” to explore the current socio-political moment, in which questions of inclusion, exclusion, ownership, and rights of access are constantly being challenged across a wide array of human endeavors. It will be realized through collaboration with multiple exhibition sites as well as programmatic partners in neighborhoods across the city. The current list of partners is available below.

“Toward Common Cause is a profoundly collaborative project and the Smart Museum is thrilled to move beyond its own walls in partnership with these exhibition, program, and research partners across Chicago. I hope that the exhibition will foster broader and deeper relationships between artists, institutions, and communities while creating a space for us to reflect on what it means to support a vibrant cultural community for all,” said Amina Dickerson, Co-Interim Director of the Smart Museum.

Additional details about Toward Common Cause—including exhibition dates, visitor information for each venue, related programs, and a full checklist of works and projects—will be made available at a later date through the full companion website, towardcommoncause.org.

University of Chicago and research partners

Toward Common Cause: Art, Social Change, and the MacArthur Fellows Program at 40 is organized by the Smart Museum of Art in collaboration with exhibition, programmatic, and research partners across Chicago. It is supported by the John D. and Catherine T. MacArthur Foundation.

Additional support for individual projects has been provided by Allstate; a Mellon Collaborative Fellowship in Arts Practice and Scholarship at the Richard and Mary L. Gray Center for Arts and Inquiry; the Visiting Fellows Program at the Neubauer Collegium for Culture and Society; and the Smart Museum’s SmartPartners. 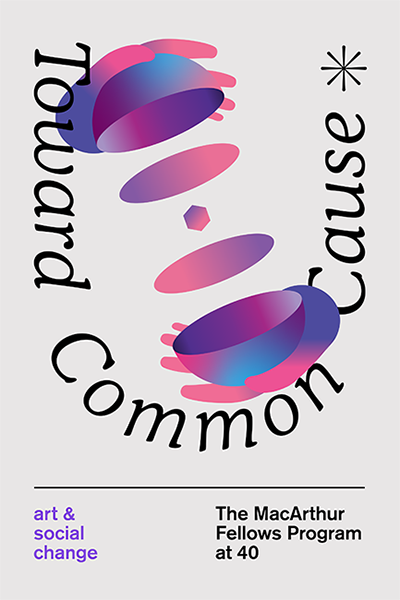