While many of us are still new to working from home, artists Laura Letinsky (American, b. 1962 in Canada) and Michiko Kon (Japanese, b. 1955) have worked from home for decades.

Laura Letinsky and Michiko Kon sought inspiration after breakfast, looked to their plates for raw materials, and set up their cameras in the kitchen. Taking food as their subjects, the created still life images with what was in the fridge and laying around the house. Their images are quiet, contemplative, subtle—but also make allusions to decay and desire. For both artists, the home became a rich space for their practices, a retreat for contemplating themes such as materiality, consumption, and mortality, as well as the artists’ own places in art history. While we at the museum treat the pandemic as an opportunity to dig deeper into the Smart’s collection, I find that still life photographs by Letinsky and Kon suggest the space of the home can host a career’s worth of artistic production, and that the things of the home can serve as objects of living as well as subjects for working.

In the late 1990s, Laura Letinsky worked from home as she turned to the genre of still life, by way of her interest in 17th century Dutch painting. As she told the Smart in a 2012 interview, during the Northern Renaissance, still life painting was “thought of as being women’s work… it was about everyday, common things, as opposed to grand historical narratives or portraiture/landscape.” This genre resonating with her own subjectivity as a woman artist, Letinsky dug her heels into its everydayness by restricting herself to using whatever materials she had at home. When reflecting on her first forays into still life, Letinsky spoke to fighting the urge to find new and alluring subjects and instead challenged herself to “think what I had around me [as] being enough.” And yet, her early works strongly resisted an aspect of still life that was central to the genre since the 17th century—its depictions of opulent objects and perfectly delectable foods. Whereas Northern Renaissance still life paintings used luscious table settings to appeal to desire and moralize needless consumption, Letinsky’s photographs take undesirable food scraps, dirty dishes, and wilted bouquets as its subject matter, composing them within images that might may you cringe upon a double-take.

Untitled #12 (1997), one of Letinsky’s earliest still life photographs, shows breakfast dishes far from banal or boring; half-eaten bread crust, sticky fish bones, and eggshells become viscerally evocative (my stomach churns just looking at them). The different textures of food contrast with each other; the bread is porous and crumbly, whereas the fish bones are gooey and thorn-like, the eggshells fragile and jagged. Their rich material qualities aside, these dirty breakfast dishes leave me wanting to clear the table. By making viewers wish to look at something neat and tidy, the photograph accomplishes still life’s 17th century project to evoke viewers’ desire. And yet the desire we feel is not to reach for a golden Dutch bread loaf—instead, we wish the table to be clean ASAP, before the butter melts. Thus, we are confronted by the very desire that Letinsky felt when she longed for new subject matter while challenging herself to make do with her breakfast dishes.

Letinsky clearly did not leave the dishes as they were when she finished eating; instead, she carefully composed them. Paralleling the diagonal radiation of sunlight from the window, the breakfast dishes cascade toward the lower left-hand corner of the dining table. There, two plates are precariously poised along the table’s edge. Behind them, the saltshaker could fall, too. Appearing at once delicately and haphazardly placed, the table setting takes on artistic significance in its arrangement. The dishes’ subtly choreographed interplay with the light streaming through the window indicates Letinsky’s small interventions upon the scene as she adjusted their placement. That the two plates and saltshaker might topple off of the table activates the dimension of time; their placement resists both the scene’s inanimateness and its preservation in a photograph, inviting us to imagine what could happen next. The objects transcend the singular moment a photograph can capture by alluding to a future in which someone might accidentally jostle the table and cause them to fall off.  Upon these plates, scraps of food point to what may happen in the coming hours: the bread crust will become hard and stale, and the gooey fish skin will seal to its plate’s surface. Moving beyond the yuck-factor we see in dirty dishes, Letinsky invites us to look closer at her small interventions upon their arrangement and their rich material qualities, so that we may see how they are activated and even animated under the camera lens. Though they may remain repulsive to many viewers, these dirty dishes served as Letinsky’s substrate for an evocative, nuanced, and historically resonant artwork.

Though still working within the confines of her home, Michiko Kon approaches her materials and genre in strikingly different ways than Letinsky. The fish with which she works have not been eaten—instead, it is so fresh it might still be alive. In The Red Lingerie (1995), a mass of sliced tomatoes and fish heads, whose bulging eyes catch the viewer’s gaze, takes the shape of a bustier. Diaphanous fins and tails serve as lacy accents, and a long, eel-like head dangles across the hanger, holding a playing card with a blood-red smear. Sliced and whole tomatoes forming the bodice are equally plump, glossy, and red, as are the flower between the breasts and the roses in the background. Frozen upon the plane of a photograph, the perfect ripeness of these materials is preserved; however, we can easily imagine the array of smells (from stinky fish to sweet roses) intensifying in the moments after Kon captured her image.

Fresh fish and fruit first captivated Kon’s eye within the context of the cuisine of her hometown, Kanagawa, Japan. Quoted in a 2014 essay by Samuel Morse, Kon revealed:

Combining fish and produce with clothes from her closet in the 1980s and 90s, Kon made photographs of what, in her words, “captures my attention in everyday life.” Like Letinsky’s Untitled (1997), Kon’s Red Lingerie invites allusions to 17th century still life painting. Kon, too, explored the everydayness of still life by using the materials that she had around her to construct her subject matter. While at first glance Kon seems to have brought forward the allure of 17th century table settings with her luscious, vibrant fish and tomatoes, upon looking closer, The Red Lingerie becomes as repulsive as Letinsky’s Untitled.

From afar this bustier looks quite decadent, but we can’t help but feel taken aback when we realize it is made of dismembered fishes whose eyes continuously, creepily stare out at us. And yet, Kon’s composing of her materials were more transformative gestures than Letinsky’s small adjustments. We can imagine Kon using instruments like tweezers to carefully place each fish head, fin, and tomato slice. As she highlighted the glittering and glossy skins we might normally find in fresh fish and fruit, Kon also totally recontextualized these materials of lustrous, curvaceous lingerie and therein foregrounded the eroticism that first caught her eye. The fish and fruit become the materials of a dream-like fantasy—until we make eye contact with the fish and realize their sentience and mortality.

This tension between fascination and repulsion mirrors the unbridled consumption of Japanese society during the Bubble Economy of the 1990s. Living in Tokyo during this time, Kon was surrounded by store windows displaying ornate fashion that was often uncomfortable for women (think high heel sneakers). The scale of Tokyo’s consumption was especially evident for Kon at the Tsukiji fish market, where, according to Morse, Kon recalls that she was struck by the sheer amount of seafood eaten within what was then a megacity of over 33 million people. Taking home fish from the Tsuikji market for her photographs, Kon retreated and removed herself from this consumer society.  From within the privacy of her home, Kon was less focused on cultural critique and more intent on activating the material qualities that first drew her to the fresh ingredients of her hometown cuisine. Her uncanny compositions like the bustier of The Red Lingerie became unlike anything found outside.

In a 1998 article, Noriko Fuku cites common interpretations among men that Kon’s work is “typically feminine”—upon which she points out that Kon’s making work in her kitchen could better be understood as following photographers across history (across genders) who turned their kitchens into darkrooms for developing their photographs. Similarly, Letinsky’s initial interest in still life should not be reduced to the correlation between Letinsky’s own identity as a woman and the 17th century view that still life was “women’s work.” Like Kon, Letinsky’s primary project is to activate on the material qualities of her subject matter and engage art historical precedence. The breakfast dishes of Letinsky’s Untitled were less mirrors for reflecting on her own identity, more platters that offered icky food scraps up for observation and could enable her work to join the historical trajectory of still life that began in the 17th century.

Just at Letinsky’s and Kon’s work resist strict interpretations of being born from their identity as women artists, their turning the home into studio space also works against historical correlations of the home as a confining sphere for women. In her seminal book The Second Sex (1949), Simone de Beauvoir describes the home as a space of “immanence,” where women are sequestered and unable to pursue the same professional growth as men who “transcend” their home lives and become productive, creative, and active in their professions and participation in society. By setting up their cameras in the kitchen, Letinsky and Kon didn’t passively sit around like the mid-century stay-at-home moms Beauvoir describes. Instead, both artists found the creative potential within the home, using what they had around them as fodder for experimentation with material qualities and art historical categories.

Seeing and thinking about these works from my home, I can’t help but see the vase of flowers and snack bowl of fruits next to me differently. Of course, I don’t feel compelled to show you my half-eaten strawberry tops from earlier this morning. Nonetheless, the two photographs open my eyes to observing the various material qualities of these everyday things. Though I may not be trained to compose materials in ways that activate their artistic potential, after thinking through Letinsky’s and Kon’s works, I do see the space of the home as less my quarantine confines, and more as enabling another look at the things that I see daily, and engagement with the artworks that reside at the Smart.

There are sea and mountains in the town where I have been living since my birth. We can get fresh fish and vegetables there. When I look at them or make food from them, more than having an awareness that they are foodstuffs, I feel the delicacy and beauty of their forms, the eroticism of raw things, as well as their transience.

Laura Letinsky talks about her interest in still life painting and other inspirations for her photographs. 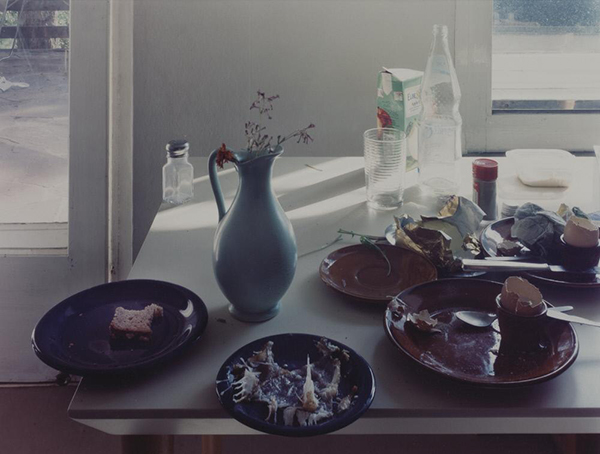 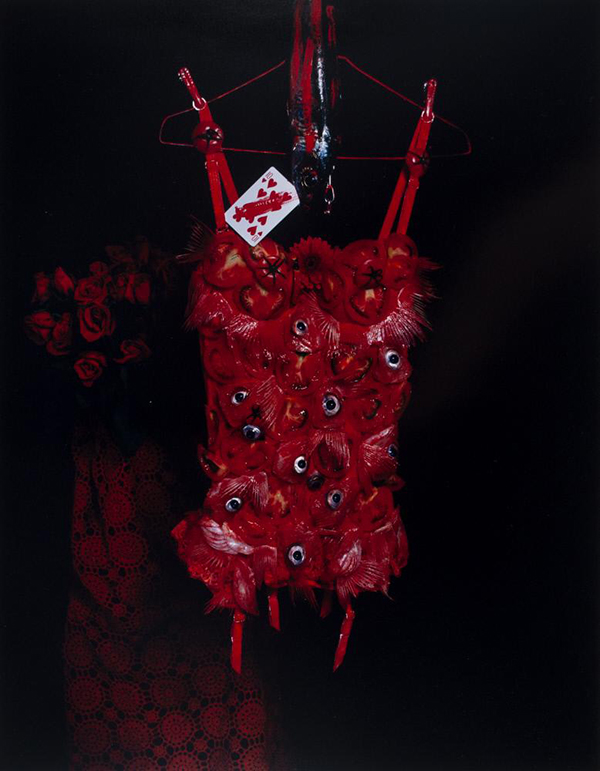 Michiko Kon, The Red Lingerie, 1995. Smart Museum of Art, The University of Chicago, Gift of the Estate of Lester and Betty Guttman, 2014.473.