When I took the Core sequence “Self, Culture, & Society” during my first year at the University of Chicago, it was one of the most eye-opening academic experiences I’d ever had—and it has remained one of the best courses I’ve taken at this university. I’ve taken the texts we read in “Self” with me over the years, and their teachings have shaped the way I approach intellectual problems. More than that though, the course completely changed the way that I think about the world.

So, I was incredibly excited to revisit my experiences during the last few months of my final year in the College, when I was the Smart Research Associate for the recent exhibition Smart to the Core: Embodying the Self. Organized by the Feitler Center for Academic Inquiry in tandem with the Division of the Social Sciences, the exhibition at the Smart Museum of Art was designed to be used as a teaching tool and additional resource for the “Self, Culture, & Society.” Using this course as a framework, Embodying the Self presented works by modern and contemporary artists—of varying races, ethnicities, gender, and sexual identities—who explored the question of a construction of self through various artistic strategies.

I applied for this particular position, not only because I love museums and really see myself in museums in the future, but also because I was very interested in engaging with the kinds of artwork it featured and drawn to its curricular purpose. Needless to say, especially if you know me personally, I love art, art history, and art historical research. I was excited to participate in a different kind of project than I had before, where I was a smaller contributor to a large scale endeavor, and through which I could also partake in diversifying the scope of “Self, Culture, and Society.” When I was a student, I’d thought the class had been lacking in representation in its syllabus, and I was thrilled at the idea of an exhibition with a diverse repertoire that spoke for itself. The idea of artworks that complemented, worked with, and maybe pushed against certain social texts was incredibly exciting.

My position and the exhibition definitely lived up to these expectations. In addition to my own projects and responsibilities as an associate—like writing my first-ever object labels—I watched curators Issa Lampe and Berit Ness engage the exhibition with the curriculum in real time. They spoke to “Self” professors, offering information and advice concerning how to teach with and from the exhibition. They hosted and facilitated many classes in the gallery space, gave a reception for the entire sequence, and were resources for a very successful first iteration of a course-related exhibition as students engaged and through artworks in tandem with text. Students of “Self” were able to interpret the exhibition using the framework they’d developed in class. In the center of the room were books and texts for visitors to revisit while in the exhibition, annotate with ideas they’d developed in the exhibition, etc.

Around the same time that I became a Research Associate, I also completed training for and became a docent with the Smart. This allowed me to engage with the exhibition in an entirely different way— I was able to understand through practice and engagement that the exhibition’s framing didn’t need to limit interpretation, but could be expanded upon and retooled when considering different groups and their backgrounds.

One moment I think back often is a tour I co-led for a high school class of AP Art History students, in which we discussed Hank Willis Thomas’s I Am A Man. In this tour, we asked students to think through each phrase in the piece, and their relationship to race in American society. We spoke to them about collective versus individual identity, and the making of a self in all of this. They were extremely participatory, and by the end of the tour they had really understood and even incorporated this artwork into their idea of what “Art History” might be.

Experiences like this one really made the exhibition come alive for me in a way that went beyond my own engagement with “Self, Culture, & Society” and beyond my expectations of potential research that I’d developed when I’d first begun. It was incredibly satisfying and interesting to watch the exhibition exist differently for different audiences who interpreted it through both the original framework and their own methods of understanding. This, to me, was necessarily attributable to the intelligent, multifaceted curation that went into Embodying the Self, whose wall texts, overall framing, and grouping of intensely complex, multilayered, but widely legible objects opened up a space for this to happen.

All in all, I came out of my experience as a Research Associate with a newfound understanding that exhibition research, curation, planning, and educational aims all go hand in hand and necessarily need to feed and work off each other in order to measure the success of an exhibition. 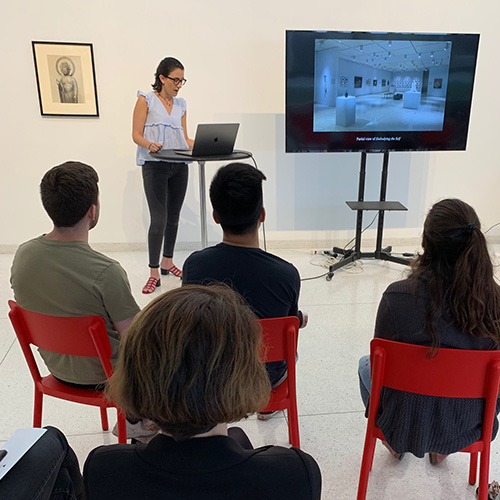 Martina Lentino shares outcomes from her time as a Research Associate during an event in May 2019.