Where does a sculpture come from? If it’s a bronze from the early 20th century, you can flip it over and check the foundry mark on the bottom. Occasionally, however, these sculptures were never stamped. In other cases, the foundry mark may be unreliable.

Over the past year, researchers from the Northwestern University–Art Institute of Chicago Center for Scientific Studies in the Arts (NU-ACCESS) analyzed the elemental compositions of 23 sculptures from the Smart’s collection using material samples and a portable X-ray fluorescence spectrometer. Project team member Monica Ganio will share the findings at a public talk at the Smart on November 19 at 1 pm.

Results showed the composition of the ternary copper alloy, namely copper together with zinc and tin, used by the foundries that cast the objects. Comparing the amounts of zinc and tin, the two principal alloying agents, with foundry marks, archival documents, and previously published data, the project has shed new light on the physical orgins of these sculpture.

While much art historical information was confirmed by the technical data, some contradictions also arose. For example, the chemical composition of a Lipchitz sculpture with no foundry mark, Study for Hagar: Maquette No. 1, suggests that it was cast at the Georges Rudier foundry in Paris, but biographical evidence shows that Lipchitz was living in New York at the time. Also, extremely high zinc levels in Rodin’s Reclining Figurequestion the Alexis Rudier foundry mark stamped on the bottom of the sculpture, suggesting it was produced at the Susse Frères or Clementi foundries.

Learn more about the study and its findings at the event on November 19 or check back on the Smart Blog for future updates.

* On view in Carved, Cast, Crumpled: Sculpture All Ways.

A version of this article was originally published in the Fall 2014 edition of At the Smart. 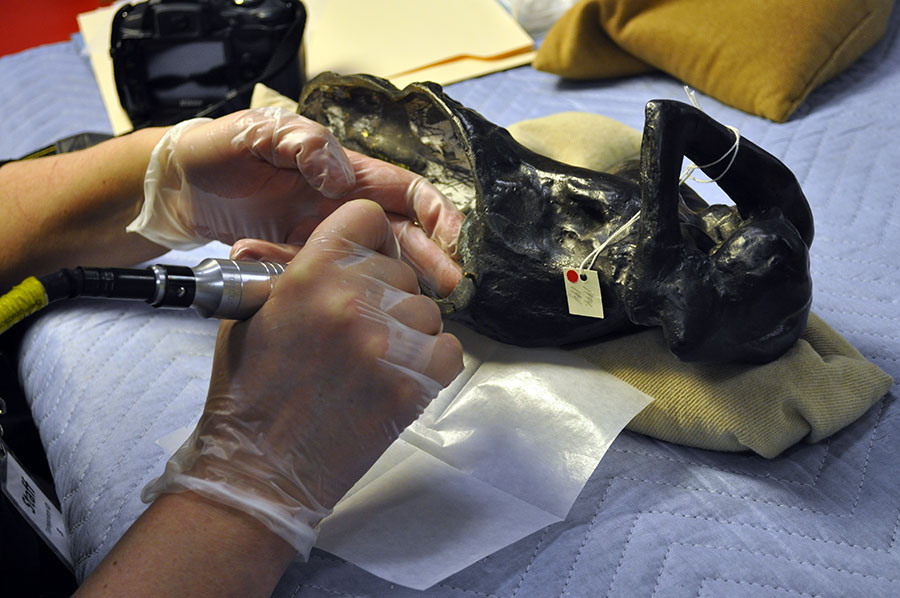