Multilingual live radio and archival audio program presented as part of Toward Common Cause: Art, Social Change, and the MacArthur Fellows Program at 40

In a first-ever partnership, Jane Addams Hull-House Museum, Public Media Institute, and the University of Chicago’s Smart Museum of Art present a year-long series of experimental audio performances from Guillermo Gómez-Peña, a performance artist, writer, activist, and MacArthur Fellow, class of 1991. The series is an initiative of Toward Common Cause, a multi-venue exhibition and program series organized by the Smart Museum to mark the 40th anniversary of the MacArthur Fellows program throughout 2021.

Gómez-Peña’s Mex Files: Audio Art & Strange Poetry from the US/Mexico Border offers multilingual live radio and archival audio programs addressing “the multiple pandemics of racism, sexism, xenophobia and neo-colonialism on steroids in the Trump Era.” Throughout his life, Gómez-Peña has worked in audio art and radio across multiple genres, from poetic journalism to Spanglish spoken word, and from radical storytelling to collaborations with musicians, poets, and activists. This ongoing series will present samples of his previous work (1980–2015) and newly recorded material created in the last two years and during lock-down.

Audiences can tune in to Gómez-Peña’s Mex Files every other Wednesday at 6:30 pm (CST) at 105.5 FM WLPN-LP or stream on twitch.tv/lumpenradio.

An Open Letter to the Museum of the Future

Guillermo Gómez-Peña has an obsession with rewriting and restaging so-called “Western Art History” while highlighting colonial legacies of systematic exclusion, demonization and fetishization of Brown, Black, and indigenous bodies. This radio keynote challenges contemporary art museum practices and calls for an open discussion regarding radical restructuring from within.

Watch Gómez-Peña’s open letter above and add your voice by emailing tomuseumsofthefuture@gmail.com or leaving a message at 773 823 9700. Submitted letters and voicemails may be read by Gómez-Peña on his bi-monthly experimental audio series on Lumpen Radio or be included in Jane Addams Hull-House Museum’s upcoming exhibition, public programs and in print. Letters should include preferred names that may be used on the radio.

Exhibition of work by Guillermo Gómez-Peña

The twice monthly radio series leads up to a new exhibition at Jane Addams Hull-House Museum featuring Guillermo Gómez-Peña and La Pocha Nostra and their incisive challenges, past and present, to cultural hegemony. Alongside new performances, audio, video, and archival material of Chicago based performances by Gómez-Peña and collaborators, the exhibition looks back at the history of an experimental museum opened by Hull-House co-founders Jane Addams and Ellen Gates Starr in 1900, as well as other cross-cultural efforts to provide access to the arts, in relation to present-day demands for structural change inside cultural institutions.

I invite you dear foreigner in my performance country to dream with me and send me your own letters imagining a better art world or rather a myriad of art worlds, coexisting in synergy with nature, radical imagination, and community.

—Guillermo Gómez-Peña, An Open Letter to the Museums of the Future 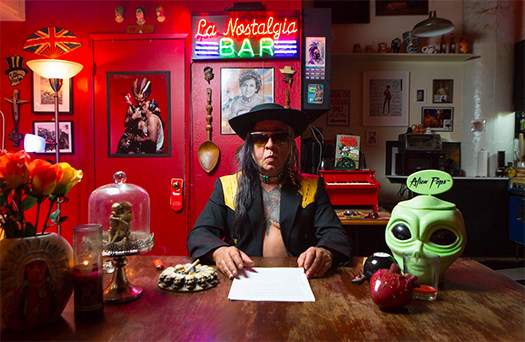