In an oasis between Naima Green’s lush portraits of Chicago creatives and Minnie Evans’ Untitled [visionary garden design], Gabrielle Sanson’s (MFA ‘20) Tensions Unfold finds its home in Down Time: On the Art of Retreat.

A retreat within an exhibition about retreat, Sanson’s coloring poster (PDF) invites viewers to color an intricate ecosystem of natives, aliens, and invasives. Geometrical frames on the front page form categories of varying porosity: here, a coy columbine comfortably confines itself to its box, and there, a bindweed creeps and winds throughout and across the borders. The back page, a dense field of invasive plant species, is interrupted by a vacant space open to all under a visitor’s colored pencil.

Originally from Cape Town, South Africa, Sanson pursues an art practice that charts the contemporary relevance of painting in its artistic and social capacities. As an MFA candidate at the University of Chicago, she offers Tensions Unfold as an invitation to explore the socio-ecological parallels and relationships between our concepts of nativeness and alienness. In this interview, she discusses the origins of the project in her thinking about migration, her attempts to define a sense of place in Chicago, and her collaborations with an ecologist.

Jad Dahshan (AB ‘21) interviews the artist about the project.

I was wondering if you could start by telling me about your broader artistic practice—I see a lot of plants in your studio.

So, my practice is concerned with a couple of things. I think of my practice as a painting practice where I’m interested in the materiality of painting but also in this rather peculiar legacy that painting has, and what is the potential and relevance for the medium in a contemporary context.

And then, I also am really interested in reflecting on the South African lived condition, and specifically this kind of socio-political and socio-economic dimension of what it is to live in a post-Apartheid context. So, in a lot of my work, I think a lot about questions of race, identity, and socio-economic status. And I think about the tensions that still exist, and that’s a large part of the reason I’m in Chicago-because of that parallel between Chicago and the city of Cape Town where I’m from.

How did you get involved with Down Time and this project?

In June of this year, my MFA cohort and two Master’s students from the Art History Department, Yiting Li and Harry Choi, put on a show in Pilsen called Borderline Tests. A project I proposed for that was a plant installation, loosely inspired by Ikebana, that featured these buckets that are labelled: native, alien, invasive, and benign. So, I went and foraged a bunch of plants for this installation and tried to anthropomorphise the plants and set up these tenuous relationships in these arrangements.

Leslie had heard about that project [from Gabrielle Luu, a student in Exhibition in Practice I], and it seemed to really speak to what was going on with Down Time. And she just like called me [and] asked like, would I like to do a coloring-in poster based on the interests around that project.

What was your approach to translating the thought in the installation to something on paper?

So, I was thinking about the relationships between these three subgroups of flora that are all found in the Chicago region. I’ve gone and foraged, I think to make sense of the landscape here as a foreigner myself, because that’s how I feel like I get a sense of place. You arrive in a foreign city, you get a taxi from the airport somewhere, and none of the plant-life looks familiar to you.

What influenced the decision to populate the the back page entirely with invasives? And then to interrupt that with a large, blank rectangle?

Does the idea of a field or a patch of invasives feel comforting or disquieting when there’s this large vacant space that’s hovering above or in it? Are they crowding around something to keep it protected? What does this mean in relation to this dense field? Thinking about this as being open to possibility. People might want to put a shopping list there, or they can scribble there, or whatever. One could draw their own type of plant there. Do another study, or a sketch.

This surface is more mysterious to me. In productive ways, I think that there are multiple ways it can be read, but I think I saw it as, one way or another, the idea of the interrupted homogenous surface. I’m going to purposely keep that a little vague.

By the end of the show, what do you want these color-in posters to have added to people’s experience besides providing a space for retreat?

Well, I think all responses are cool. I would hope that to some degree people interacting with it are going to ask questions like what do these plants mean, which I think are the initial instincts you might approach when you see that there are these little labels on the plants. I think that might be enough of an invitation for people to grab their phone and google a name or something.

And maybe, if I’m going to take a step further, thinking more contextually: like why here? Why now? Why these plants? What does this say about the show, or Chicago, or 2019?

But I also think I’ll feel very satisfied by people picking this up and feeling like ‘hey, I actually haven’t done this, like I haven’t colored in a while, and I want to rub through this with some colored pencils.” I think that that’s totally satisfactory and totally fine. So, yeah, I’m totally happy if people are like, “I actually just want to not think about stuff,” but I think the aim of this was to raise questions.

Do the plants you chose have any significance besides the ecological?

Within the context of a show about retreat, how is the definition of "invasive" complicated? Do you think it teases out a suggestion of these “invasives” seeking retreat from something else, even if they’re bringing damage to their destination?

Yeah, I think that that’s been my thinking the whole time throughout this project: who is what? How are we bringing our own subjectivities into the space of the exhibition to think about who do we define as these things?

I think the idea is to examine the reduction of those definitions, or the collapsing of those social categories of invasive alien, native, alien, benign. An interesting thing to put forward is these migratory aliens, whether they’re invasive or not. I really like that idea of moving, and potentially retreating from elsewhere.

Do you have a background in ecology/biology etc?

I actually don’t have a background in either. I just have a really keen interest in plants and gardening, but also things like ikebana and floral arrangement, and I think there’s a lot of self-awareness in that leisure time and me being able to afford it. That’s why I’m trying to critically examine these interests. I’ve had some experience in Cape Town of being familiar with the plant-life there, and so coming to a completely different context where I don’t have a sense of that, and then thinking about the social and political conditions of these subcategories here versus what their implications in South Africa are.

How did you go about conducting the research behind this project?

Being foreign to the States, I of course didn’t have the time, expertise, or knowledge to grasp all this information myself. So, at the beginning of the Borderline Tests project, I needed to have someone with encyclopedic knowledge walking around [Chicago] with me, pointing things out, describing things to me, and having a discussion. I contacted Joy Bergelson, who’s on the Committee of Evolutionary Biology here at UChicago, and I was like I need to team up with a lecturer or something who is going to have time to assist me with this.

Long story short, I met a really wonderful woman called Alison Anastasio, who is a lecturer in the [Program on Global Environment]. We walked around Hyde Park a lot, and Jackson Park, and Washington Park, and thought about all these different species, and having all these discussions around plants, basically. I am hugely indebted to her for her knowledge, from which all of this stuff stems.

After gaining that knowledge, how did you select the plants for the poster?

I was thinking about how certain plants have really strong connotations. I think that was really important because this isn’t a project only to be understood by scientists—I want it to be accessible to a larger audience. I have a long list of plants that I examined:

The columbine is this incredibly fragile, delicate, enormously beautiful, intricate plant, and it’s so, so specific as a symbol of the Prairie flora. I think that that was a good example of the idea of the fragility of an indigenous landscape.

The one plant that feels incisively metaphorical for me is Yucca smalliana, which is a very rare example of a naturalized alien in Illinois. It’s part of people’s diets, and then this one very specifically is a yucca that was an alien to the Chicago landscape, but has seamlessly integrated in a completely non-invasive, benign capacity. The Yucca smalliana was just so beautiful in terms of thinking of the migration of populations from the south of the United States but also further south, finding retreat, and finding freedom, finding economic stability or hope for a better life. And so that holds a specific kind of significance for me; I feel like that’s quite an important example-thinking about migrations of people and about harmonious integration into an environment. I think there’s a lot socially that’s embedded in that.

And then, this [back page] for example, this homogenous landscape of all these invasives, was just like loads of examples that I found, that are critically disastrous for the Chicago and greater Illinois landscape, and these are all illegal to plant.

Is there a next step?

I think after having done the Borderline Tests arrangements and after having done this poster, I’m not 100% sure how I want to manifest these relationships further in the work. So I feel like it’s something I kind of need a little bit of distance from, in order to reapproach at one point. I don’t think I’ll stop collecting specimens or pressing things or doing weird things like that, but I just have to be careful about how I frame it in the space of the broader concern of my work. 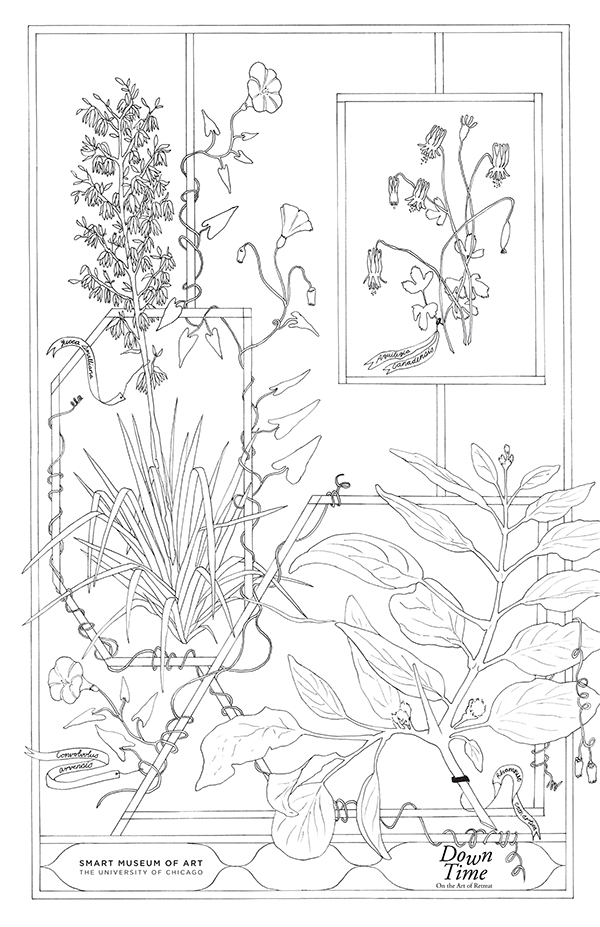 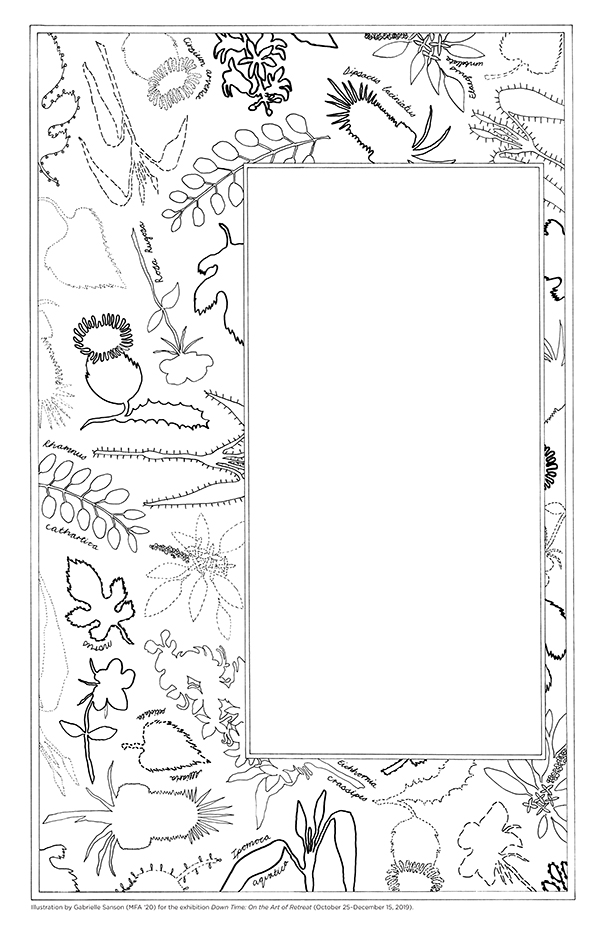 Gabrielle Sanson, Tensions Unfold, 2019, back side. 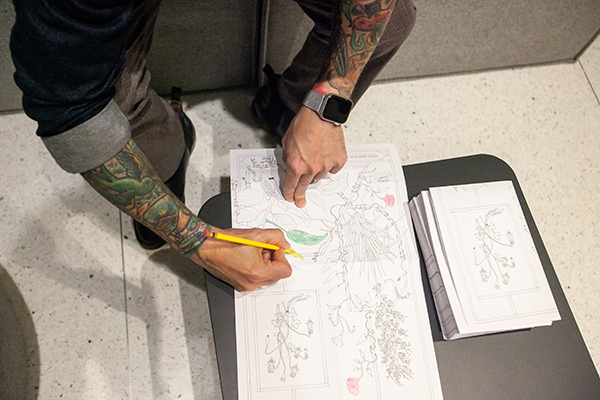