by Leslie Wilson, Smart Museum Curatorial Fellow for Diversity in the Arts

A black man reclines on a low haystack sleeping in the hot sun while a child tickles his ear with a feather. Three white male figures occupy the immediate foreground in various forms of repose and quiet activity. The tools of their work are at hand, but these laborers are firmly in the world of a mid-day break in William Sidney Mount’s Farmers Nooning (1836).

Yet, as Elizabeth Johns has persuasively interpreted Mount’s famous nineteenth-century painting, the composition’s allegorical dimensions suggest a far more charged significance for the black man’s sleep and the child’s prank.[1] Through an anti-abolitionist lens, Johns posits that the “ear tickling” child who wears a tam-o’-shanter represents those who sought to ill-advisedly stir up black people, to wake them up in 1830s America (as if they did not possess their own ample motivations). If that is the case, rousing the sleeping figure, even if he is not presented as a slave, is akin to the act of consciousness raising. Outstretched in resplendent, indulgent sleep—open to accusations of laziness or the even more racially charged designation of “shiftlessness”—the dormant man has the potential to be all at once peaceful and dangerous.

I quietly meditated on Mount’s painting as the students of “Exhibition in Practice I” shaped the concept behind this exhibition. It then found its way into class discussion through Cameron Robertson (AB ’19), who suggested this as an artwork to consider for our exhibition Down Time: On the Art of Retreat. While it fell outside of the timeline that we later established for the show, it still came to the fore as we explored such questions as: How does resting mean different things depending on who is doing it and who is representing it? How do we draw the line between rest and laziness, dormant and dangerous, waiting and loitering, retreat and running away?

Seeking to assail such dichotomies, the “down time” of the exhibition’s title operates on multiple levels—it aims to signify.[2] It speaks to key themes of rest and recovery, while invoking “down’s” use in black vernacular to mean cool and assert affinity, and pointing to how time itself can be racialized. It attends to a claim for black people to take time and space—to take up time and space—on their own terms.

In Spring 2019, I asked the 13 undergraduate and graduate students of the Department of Art History’s “Exhibition in Practice I” course to conceptualize, plan, and design an exhibition for the Smart Museum of Art. Forming a curatorial cohort, the students explored the Smart’s permanent collection, met with local collectors, and debated a wide range of ideas to put forward an exhibition. The diverse, ambitious, and provocative proposals included an examination of photography’s relationship to privacy, the many dimensions of Afro-futurism, materials of mourning, and exploring black art in many registers from literal to metaphorical. We discussed the ideas driving these proposals, the artists and artworks inspiring their thinking, the history of the Smart Museum, and how their exhibition could critically engage with those legacies. We found common ground on the theme of retreat at the heart of Down Time.

Down Time explores retreat as the idea of taking time and space away from everyday life and extreme events. Acknowledging that “down time” does not look the same for everyone, this project probes the conditions for rest and recovery with emphasis on black subjectivities, while asking all viewers to consider their own relationship to retreat. Students framed the questions of the exhibition as urgent locally and globally, and inflected their selection of artworks, approach to design and layout, interpretative direction, and selection of programming and publication with that impetus. Rather than divide the exhibition into distinct sections, the concept texts of “Here,” “Elsewhere,” and “Beyond” ground key ideas about retreat that evoke both time and space, while inviting visitors to consider the works across those porous categories.

A booklet accompanies the exhibition with essays by students that examine how and why African American artists have sought out France as a refuge and beacon for creative development, the significance of craft as retreat, and the many lenses through which we can consider down time. Each draws out the nuances of this exhibition and its capacity to help audiences reflect on the battles waged, risks taken, and persistent need for time and space to rest and regroup in our homes, in the outdoors, in our communities, and in our own bodies and minds.

The contributions of summer researchers and the students of “Exhibition in Practice II” bring additional voices to the project to ask questions about who has access to down time. Where can down time be found? Who is wanted and unwanted in what kinds of spaces? How are we all implicated in what down time has been and can be? And what new possibilities might we awaken after taking that time and space for ourselves?

A version of this post appears as the introduction to a booklet of essays that accompanies the exhibition. 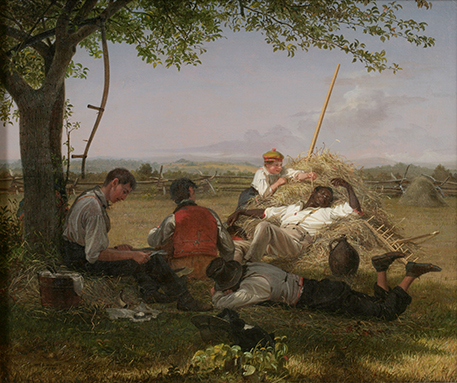