It's going on 9 weeks since I have been quarantined. I look out my window and see the houses across the street, seemingly vacant on the outside. I am at this computer every day. Working, reading, playing, and Zooming. No interaction with other humans. I drift off from the computer screen and think about one of my favorite paintings, The City by Walt Kuhn.

Walt lived from 1877–1949. He was an American painter and an organizer of the famous Armory Show of 1913, which was America's first large-scale introduction to European Modernism. Although there is no mention of it in his history, he clearly lived through the 1918 pandemic. He would have been 35. Where was he then? Did he carry out his artwork in some dank studio secluded from everybody else?

The City, represents a city that I once knew. The women working on the street, and plays. Lots of plays. Such vivid colors—the subject in the foreground, her cheeks are rouged and her eyelids have blue shadow on them. She stands in a relaxed position. Perhaps waiting, for the next John or the next curtain call. Her voluptuous body leans against the table, as she gazes off, thinking about how the city has worn on her. But she stands poised for the next activity.

Are those red tights in the corner of the painting? Perhaps it is for the next show or the next trick. Regardless, she is stoic and a fighter. Much like I am. Before we know it, we will be back into the city doing everything that we wished before this all happened. And like Walt Kuhn, we will all go on painting, enjoying paintings and living life. 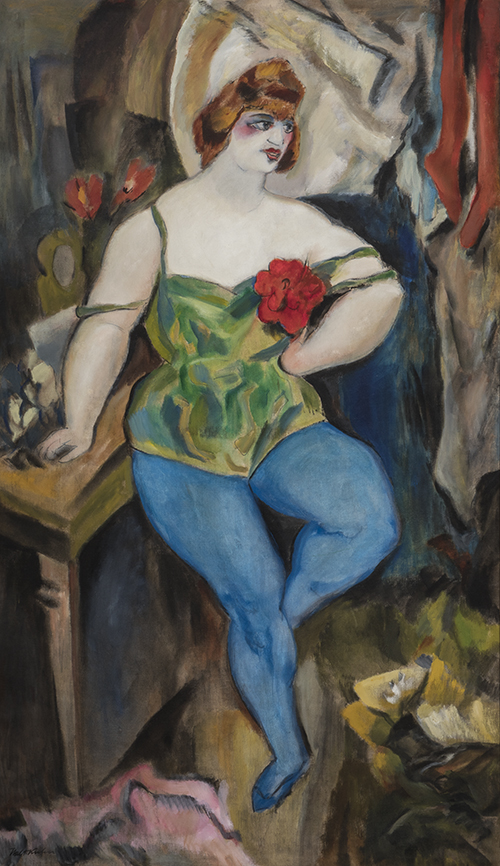 Walt Kuhn, The City, 1919, Oil on canvas. Smart Museum of Art, The University of Chicago, Purchase, Paul and Miriam Kirkley Fund for Acquisitions, 2001.125.