Last Summer, at a fancy art-party, chance would find me seated next to a wealthy financier, a patron of the arts. A lovely man, we engaged in a lively conversation on a range of topics. It was by all accounts a pleasant evening.

Then, as was not uncommon in the Summer of 2016, we found ourselves discussing US Presidential politics. He noted that he actually liked Bernie Sanders, the avuncular and charming Socialist (but second-place candidate of the Democratic Party), but he wished that the people would talk about evolution and not revolution. He further pointed out to me that the markets always course correct society; and I, feeling game, replied, true when the oppressive Czarist regime could no longer supply its people with a basic good like bread, the markets “course corrected,” and deposed Czar Nicholas II.

He took umbrage at my assertion and again returned to his thesis that we, as a society need to think in terms of evolution and not revolution. Then concluded his argument by stating flatly: Revolutions Never Work. My opening was clear, and I seized the opportunity to gleefully reply: Well, except maybe in this country…Happy Fourth of July!

I recount that story because it makes me think of all the defeatist rhetoric that accompanies any attempt for change. Change agents are either too much this, or not enough that.

On October 7, 2017, I had the good fortune to participate in Cauleen Smith’s procession/parade she dubbed If Thoughts Could Heal, held in conjunction with the exhibition Revolution Every Day at the Smart Museum. We gathered in the Roundhouse at the DuSable Museum of African American History, an inspiring architectural space that had been recently converted to an exhibition venue for the Chicago Architecture Biennial. At first, I was worried that the event was going to be poorly attended, but then as we got closer to 2 pm, people started streaming in.

I was excited to be one of the four banner holders, and as we were waiting to begin our procession from one museum to another, Cauleen came over and said that she wanted me to carry the pink banner with the fringe. (Pink is my favorite color.) Then, like an orchestra conductor Cauleen started to set things in motion by having members of Live the Spirit Residency second line brass band recite poetry by artist Krista Franklin.

Music followed and filled your body as if you were inside a giant speaker. Joy pretty much overtook me as I started to wave the pink banner alongside with my banner carrying comrades. As we left the Roundhouse we were greeted by burning incense as the artist and other collaborators led the procession to smudge the neighborhood; a form of spiritual cleansing. In fact, that’s what the whole thing felt like.

Chicago, the South Side in particular, gets talked about in the national news a great deal of late. Much of the chatter is precisely crafted to be used as a sharp political weapon brandished by the current administration. “Violence and more violence” echoes from the talking heads on TV. This grotesque caricature/bogeyman of Chicago that gets invoked in the political arena is not one that I recognize. Or at least where I live, Chicago both does and does not feel anything like the propaganda that gets bandied about in the press. Gun violence is hardly a problem particular to Chicago; it is in fact a nationwide pandemic. Everyday shootings happen across America. It is a gut-wrenching state of affairs. Something must be done!

As I processed through the streets and across the University of Chicago campus to the Smart Museum and Revolution Every Day, I felt that indeed “thoughts could heal.”  Something can be done. That if one artist can bring people together with music and pageantry—and just pure joy—what would happen if more people had more thoughts that heal…

That notion started to make me smile and dance as I carried my banner (well, that thought, and the second line brass band—I mean how can anybody resist dancing to that music!). The thought of healing, a thought that could take over one’s whole body—that to me feels like the next revolution to come. A healing revolution for you and for me.

We can revolt against wickedness with love and kindness, integrity, and grace.

Zachary Cahill is an artist, co-curator of the Smart Museum’s special exhibition Revolution Every Day, and Curator at the Gray Center for Arts and Inquiry at the University of Chicago. 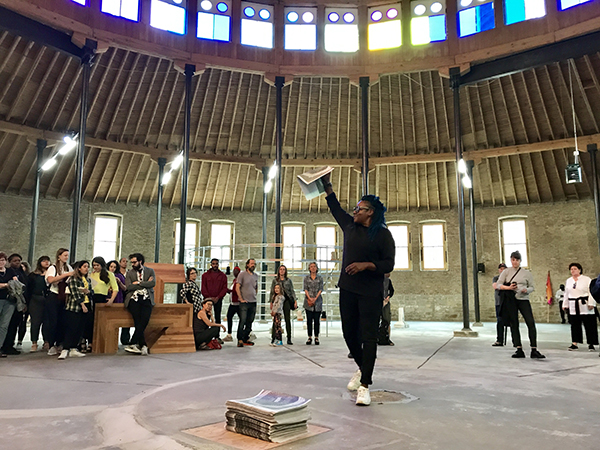 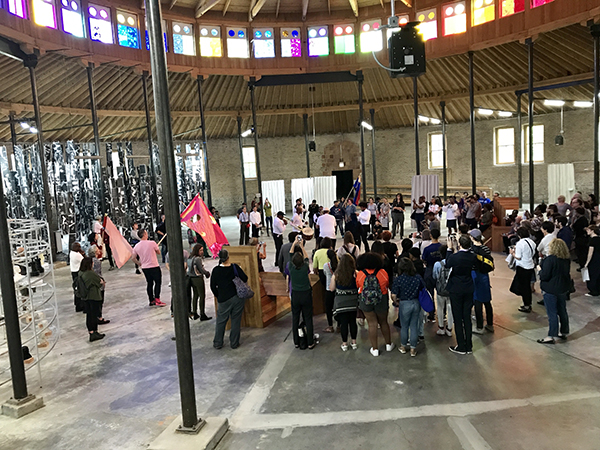 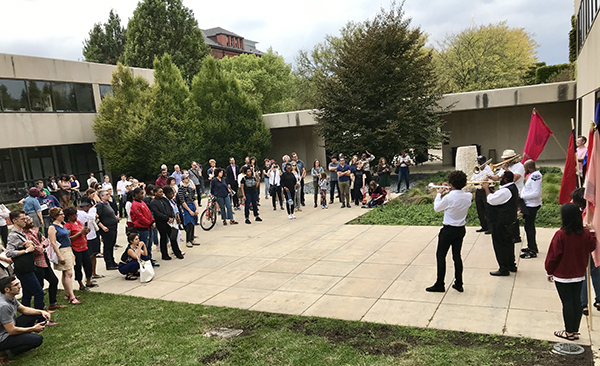 If Thoughts Could Heal at the Smart Museum of Art