The Smart Scholars program supports research opportunities for UChicago students at the Smart Museum of Art resulting in an original creative work (of visual art, music, dance, writing), exhibition, program, or scholarly essay. Students propose their own projects grounded in academic research (library, database, archive, conservation, materials science laboratory, or other museums) into one or more objects in the Museum’s collection.

Smart Scholars is an initiative of the Smart Museum of Art’s Feitler Center for Academic Inquiry made possible in part by generous funding from the Smart Family Foundation of New York. Additional support has been provided by the University of Chicago’s College Center for Research & Fellowships (CCRF).

Conor Bulkeley-Krane
2019–2020 Smart Scholar
Conor Bulkeley-Krane pursued an interdisciplinary interpretation of Roger Brown’s lithographs in the Smart Museum’s archives. Bulkeley-Krane aimed to study the works with an eye toward the key thematic and structural features of the lithographs, in the context of Brown’s broader work, in order to manifest those elements in an original audio-visual artwork.

The project was conducted in two phases. First was an analysis and conceptual synthesis of the artworks. Before delving into the scholarship, Bulkeley-Krane sought to attend to the Roger Brown lithographs on their own terms. It was essential to form initial conceptions free from an imported academic inflection. Bulkeley-Krane visited the Roger Brown lithographs and related paintings in the Smart Museum’s archives, meditated on the works, and then pursued scholarship on Roger Brown including critical reflections and the posters of his art shows at the Regenstein Library. Bulkeley-Krane’s first key insight was that particular figures (the standing woman, the man smoking) reappear across many of the lithographs and paintings, expressing the same gestures and dispositions in varying configurations. These repeated figures are scattered across his work, but Bulkeley-Krane focused on their appearance in select lithographs where their interrelations presented heightened tension. These figures are two-dimensional silhouettes, often expressing reactions to the world, but their interiority is opaque. The precise inner meaning of each figure is concealed but their attitude towards the world of the artworks presents itself gesturally, and their varying repetition across the works suggests aspirations towards narrative within the works considered as a whole, an idea also supported in the Brown scholarship. Some figures are entirely self-absorbed (the smoking man), other figures ask questions (the pointing woman). These repeated figures occupy an artworld characterized by the textural patterns of machine suburbia. Patterns of gears often occupy the horizon while the foregrounds present geometric buildings. The figure-world relation across the lithographs is discordant, suggesting a tension, between the repetitive textural structure enacted by the emerging presence of machines, and the place of the individual in suburban domesticity.

For the second phase, Bulkeley-Krane produced a piece of conceptual-audio-visual synthesis. Drawing on the student’s technical knowledge of analog electronic modular synthesis, previously developed in Bulkeley-Krane’s electronic music practice, this student used Smart Scholars funds to procure a video synthesis module, an experimental instrument component that allowed Bulkeley-Krane to build a dual-sensory electronic performance instrument. With this instrument, Bulkeley-Krane was able to dramatize Brown’s work cinematically. Using control voltage connections, the student fed images of Brown’s art into this dual-sensory instrument, and had the textures of his work literally affect the sound being generated, and vice versa. In this sonic interpretative piece, Bulkeley-Krane aimed to make present certain Brownian themes and structures: an industrial atmosphere, repetitions of patterns, questions asked but no questions answered (melodically phrased: unresolving musical passages; dissonance between leading figures and background mood), uncanny harmonics of human being and machine.

Katerina Stefanescu
2019–2020 Smart Scholar
Katerina Stefanescu worked on uniting interests in numismatics, rigorous academic research, and community outreach through a Family Day experience inspired by a few of the coins in the Smart Museum’s collection. Specifically, Stefanescu was inspired by the Smart's coins of Flacus Valerius Constantinus from the 2nd century CE.

The Smart’s collection of ancient coinage from this period reflects the historical trajectory of coinage manufacturing technology as well as the origins of coinage as an effective form of propaganda. Partnering with the Oriental Institute’s phenomenal collection of pre-coinage and early forms of trade originating from Mesopotamia, Stefanescu hopes to inspire local Hyde Park children to appreciate the artistry and history in something as ordinary as the coins in their pockets. In a Family Day event that spans both the Smart Museum and the Oriental Institute, there are numerous hands-on activities, culminating in material investigations that explore the relationship among designed objects, currency, language, communication, and business.

Through activities inspired by the ancient world and trading exercises and games, participants develop a better understanding of the day-to-day function and form of coins, currency, weights and measures, and commerce. These activities include a tour of the Oriental Institute’s exhibition of Mesoptomian trade and commerce, a grain bowl-making station, an aluminum foil-coin image imprinting station, and a clay coin-minting station. 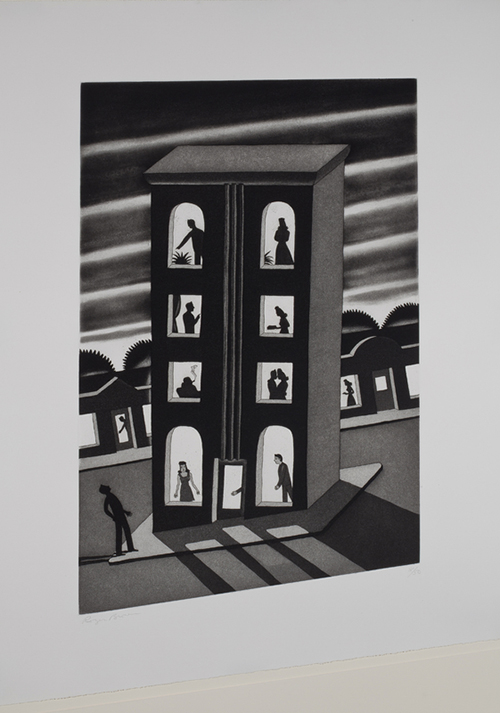 Roger Brown, Sinking, 1977, Etching and aquatint with hand burnishing. Smart Museum of Art, Gift of Roger Brown, courtesy of The School of the Art Institute of Chicago, 1997.71. 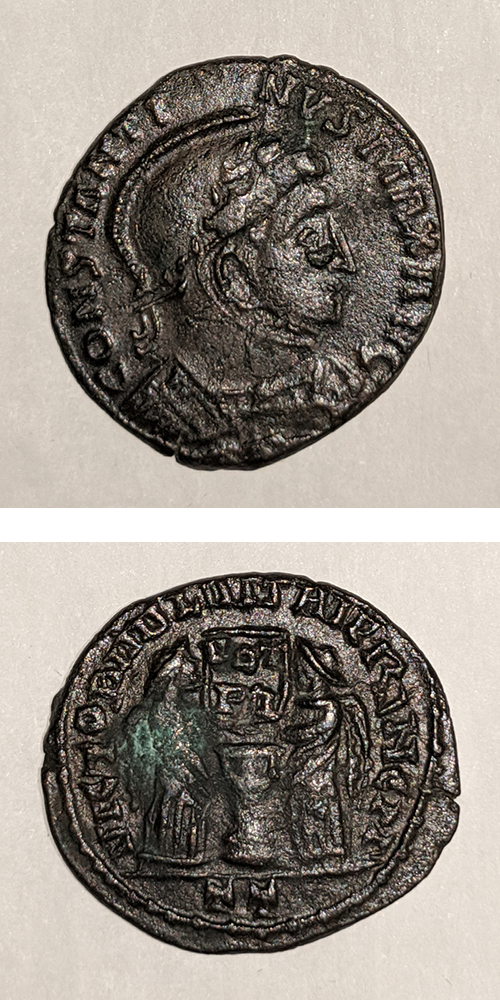