The Sahmat Collective: Art and Activism in India since 1989 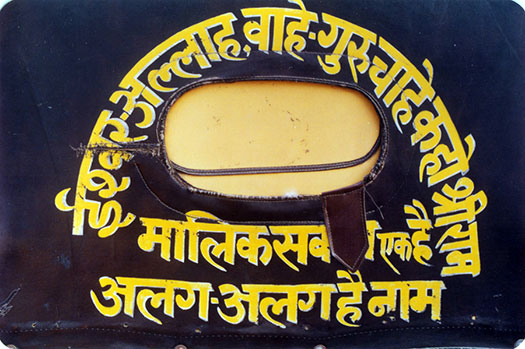 Photo documenting Sahmat's 1992 auto-rickshaw project, Slogans for Communal Harmony. The text reads: "Call Him Ishwar, Allah, Wahe-Guru, or Shri Ram, if you will / These are but different names for the one creator."

Since 1989, the influential Delhi-based Sahmat has offered a platform for artists, writers, poets, musicians, actors, and activists to create and present works of art that promote artistic freedom and celebrate secular, egalitarian values.

The collective formed in the weeks after playwright, actor, and activist Safdar Hashmi was fatally attacked by political thugs while performing a street play. In the more than twenty years since, Sahmat has drawn on India’s secular heritage and an expansive group of collaborators to produce a series of projects that engage in important political and social debates through a mix of high art and street culture.

This exhibition will introduce Sahmat's work to the United States through a survey of art and ephemera while assessing the impact this unique—and sometimes controversial—collective has had on contemporary Indian society and artistic practice.

Safdar Hashmi (1954–1989) was a political activist, actor, playwright, poet, and founding member of the street theater group Jana Natya Manch, or Janam ("birth") for short. He was deeply committed to secularism and egalitarianism, and built Janam into a forum for democratic and accessible theater aimed at political change.

On January 1, 1989, Hashmi and Janam were violently attacked while performing the play Halla Bol! (Raise Your Voice!) during municipal elections outside of Delhi. Hashmi died of his injuries the next day. His death aroused a nationwide wave of revulsion against political violence and led to the founding of Sahmat. The name is both an acronym for the Safdar Hashmi Memorial Trust and the Hindi word for "in agreement."

Ever since, Sahmat has been at the heart of what co-curator Ram Rahman likens to "India's culture wars."

Animated by the urgent belief that art can propel change and that culture can reach across boundaries, Sahmat has offered a platform for an expansive group of artists and collaborators to present powerful works of art that defend freedom of expression and battle intolerance within India's often divisive political landscape.

Sahmat's projects (timeline PDF) are defined in part by their consistent stance against the threat of religious fundamentalism and sectarianism—known in South Asia as "communalism"—in public life. Collaborations have cut across class, caste, and religious lines and have involved artists, performers, scholars, and a wide array of other participants, such as the Hindu, Sikh, and Muslim auto-rickshaw drivers in the contest Slogans for Communal Harmony. Projects also have sought to counter political distortions to India's history, most notably in Sahmat's multifaceted response to the demolition of Babri Masjid (Babur's Mosque) in Ayodhya. In other cases, Sahmat has sought to celebrate India's cultural diversity and democratic ideals, engaging artists to create work that responds to ideas of national history and individual identity.

See a complete list of all those who have participated in Sahmat projects (PDF).

The exhibition will be accompanied by a substantial, full-color publication that offers new interdisciplinary perspectives on Sahmat as well as investigations into India’s history, politics, and culture from University of Chicago scholars, members of Sahmat, and other specialists.

Object/Subjective
with Rebecca Zorach and Leela Gandhi
May 17, 2013, 2 pm

By invitation only. Become a SmartPartner+today to receive an invitation to this special event.

In a series of videos, artists and other collaborators discuss Sahmat's history and its impact on contemporary art-making in India.

Browse all the videos below (or on Vimeo). They're also available on iPads in the exhibition itself.

In 1989, playwright, actor, and activist Safdar Hashmi was fatally attacked by political thugs while performing a street play outside of Delhi. His death led to the founding of Sahmat.

Each year, Sahmat marks Safdar Hashmi's birthday on April 12 by organizing the National Street Theater Day in India, producing posters and engaging with theater groups all across India in a day of joint action and performance.

In Delhi, Sahmat organizes a public art project involving auto-rickshaw drivers to decorate their vehicles with poetry and slogans about brotherhood and harmony.

After the destruction of Babri Masjid in India, Sahmat draws on the medieval Sufi-Bhakti poetry and musical tradition to reflect the complex fabric of India's culture.

In 1993, Sahmat presented Anhad Garje (a phrase from the poet Kabir that roughly translates to "the silence reverberates"), a program of Sufi-Bhakti performances that promoted communal harmony in the wake of the destruction of the Babri Masjid in Ayodhya

In the aftermath of the destruction of the Babri Masjid, Sahmat produces the exhibition kit Hum Sab Ayodhya (We are All Ayodhya) and explores the multifaceted history, geography, culture, and life of the people of Ayodhya, India.

In the wake of the destruction of the Babri Masjid, Sahmat organized Muktnaad, a nightlong program of music and dance on the banks of the Sarayu River in Ayodhya, in an effort to break the siege of the Hinduvata forces through creative, rather than political action.

In 1994-1995, Sahmat commemorated the 125th anniversary of Mahatma Gandhi's birth with a yearlong series of events that invoked Gandhi's quest for a secular India, a sovereign nation, and universal compassion.

Mahatma Gandhi famously used inexpensive postcards to communicate with vast numbers of people. In this spirit and in commemoration of the 125th anniversary of his birth, Sahmat invited hundreds of artists to create postcard-sized works about Gandhi's relevance to contemporary India.

Art on the Move

Sahmat's exhibition Ways of Resisting spotlighted art made during a volatile decade of sectarian and communal violence in India, between the 1992 destruction of the Babri Masjid and the 2002 riots in Gujarat.

The Making of India

In the 2004 exhibition The Making of India, Sahmat engaged with artists to rethink the country's cultural and political histories.

M.F. Husain, the "Picasso of India," is forced into exile after hardline Hindus orchestrated a wide-ranging campaign against him in response to his painting Hindu goddesses in the nude.

The fight for freedom of expression and Sahmat's tributes to M. F. Husain, "the Picasso of India."

Through the performing arts, Sahmat has brought people together while celebrating the diversity of India's cultural history.

What is Sahmat's legacy? What impact has it had on contemporary Indian society and artistic practice?

The Sahmat Collective: Art and Activism in India since 1989 is made possible by The Smart Family Foundation; Helen Zell; the Efroymson Family Fund, a CICF Fund; The Joyce Foundation; and the National Endowment for the Arts. Additional support is provided by Larry & Marilyn Fields; Barbara Fosco, The Fosco Family Foundation; Lisa and Michael Kornick; and the University of Chicago’s Committee on Southern Asian Studies.

Presented in the Richard and Mary L. Gray Gallery and the Robert and Joan Feitler Gallery