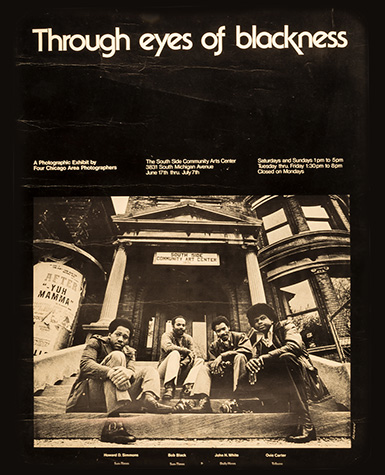 This symposium addresses the historic significance of the South Side as a community, a set of institutions, and a collection of artists.

Although under-recognized in most surveys of Chicago art, the South Side nurtured important artistic movements, raised complex questions about the nature of black aesthetics, and promoted the arts through community arts organizations in ways that are still shaping the fabric of Chicago.

FREE, but space is limited. Please register in advance.

Unfinished Business! is presented as part of Art Design Chicago by the Department of Art History at Northwestern University; the Museum of Contemporary Photography at Columbia College Chicago; and the Smart Museum of Art at the University of Chicago. It is presented in conjunction with the exhibitions The Time Is Now! Art Worlds of Chicago’s South Side, 1960–1980 and The Many Hats of Ralph Arnold: Art, Identity & Politics.

10:15–11:45 am
Spaces: The South Side and Black Cultural Institutions
This panel reflects on the South Side as a site of cultural production and activism, and explores how it functioned within and responded to the social/cultural/political conditions of the South Side

Noon–1pm
Lunch
Break for food, a listening party for The Alley LP, and a printmaking activity led by William Estrada

1–3pm
From the Archive
A series of presentations that explore historic artistic interventions on the South Side.

A Space in Time: Osun Center for the Arts 1968–1982
Yaoundé Olu, The Time Is Now! exhibiting artist and Chicago and Gary Crusader Newspapers

3:30–5pm
Panel: Shaping the South Side through Art and Activism
Artists at the frontlines of activist organizing has been a consistent characteristic of how Chicago's South Side communities have operated, whether it's 1968 or 2018. For this panel, artists, activists, and scholars come together to discuss the ways that art and activism have intersected in Chicago over the decades and what it looks like today.

Page May, founder, Assata’s Daughters
Monica Trinidad, For the People Artists Collective
Ayana Contreras, host of Reclaimed Soul on Vocalo
Abdul Alkalimat, University of Illinois
Moderated by Tracye Matthews, Center for the Study of Race, Politics, and Culture at the University of Chicago

Art & Music: The Cry of Jazz and Chicago Blues
Following the symposium is a screening of two films about the intersections of art, music, and politics on Chicago's South Side: Edward Bland's The Cry of Jazz (1959, restored 35mm print) and Harley Cokeliss's Chicago Blues (1970, digital restoration), introduced by Ayana Contreras (host of Reclaimed Soul on Vocalo) and presented by South Side Projections as part of their Chicago's Black Arts Movement in Film series.

Unfinished Business! is co-presented by the Department of Art History at Northwestern University; the Museum of Contemporary Photography at Columbia College Chicago; and the Smart Museum of Art. Support for the symposium is provided by the Reva and David Logan Center for the Arts at the University of Chicago.

“Art & Music: The Cry of Jazz and Chicago Blues” is presented by South Side Projections as part of their film series Chicago's Black Arts Movement on Film and in conjunction with the symposium Unfinished Business! The South Side and Chicago Art. Support for the film screening is provided by the Film Studies Center and the Reva and David Logan Center for the Arts at the University of Chicago.

Unfinished Business! and Chicago's Black Arts Movement on Film are presented as part of Art Design Chicago, an exploration of Chicago’s art and design legacy, an initiative of the Terra Foundation for American Art with presenting partner The Richard H. Driehaus Foundation.

Image: Howard Simmons, detail of poster for the exhibition Through Eyes of Blackness at the South Side Community Art Center, June 17-July 7, 1973.