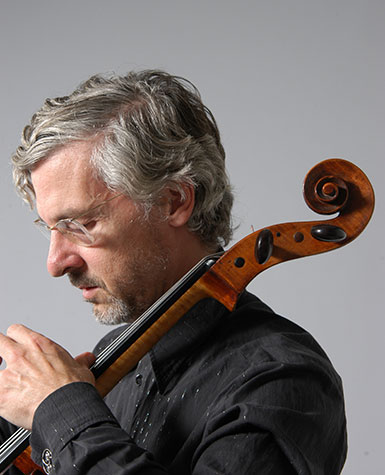 The program, presented by the Smart Museum and Lampo, includes Rice and Beans for Charles Curtis, a handmade score created by Fluxus artist Alison Knowles that is composed of wet flax pulp, lentils, rice and a tangle of strings poured out flat, pressed, and dried.

Free, but space is limited.

Program is full. Add your name to the waitlist.

The cellist Charles Curtis performs a unique repertoire of major solo works created expressly for him by La Monte Young, Alvin Lucier, Eliane Radigue and Alison Knowles, as well as rarely-heard compositions by Terry Jennings and Richard Maxfield, and works by Cardew, Wolff, Feldman and Cage. A former faculty member at Princeton University, and for eleven years the first solo cellist of the NDR Symphony Orchestra in Hamburg, Curtis is now professor for contemporary music performance at the University of California, San Diego, and tours and records internationally. His performances in recent seasons have taken him to the Guggenheim in New York, the CAPC in Bordeaux, the the MaerzMusik Festival in Berlin, Dundee Contemporary Arts, the Kampnagelfabrik in Hamburg, and Harvard University. Eliane Radigue's recent Naldjorlak for solo cello has received over thirty performances worldwide and, as part of a new trilogy, was premiered in the Auditorium of the Musee du Louvre last October. He continues to perform and record the traditional repertoire for cello, both as soloist and as artistic director of the chamber music project Camera Lucida.

Presented by the Smart Museum of Art and Lampo.

This concert is part of Concrete Happenings at the University of Chicago, a collaborative series of public exhibitions, screenings, symposia, and other programs that mark the return of Wolf Vostell’s colossal Concrete Traffic (1970) to public view following a major conservation effort.