On Saturday, February 24th, more than 40 educators participated in Sweet Water Foundation’s Fractal Seating Workshop at the Smart Museum of Art. The workshop was featured as part of the University of Chicago’s Amplify Professional Learning Community Programs, which seeks to develop a model of collaboration that leads to a systemically, and sustainably networked education community that supports rich and dynamic arts learning experiences.

Read on below to learn about this international and regenerative exchange.

The Fractal Seating Workshop focused on the notion of claiming space and exercising the means of doing so with one’s own hands. The objective of the workshop centered on construction of Sweet Water Foundation’s fractal seating units: wooden stools measuring 17” x 17” x 16” that can be used for a multitude of spatial interactions. Fractal seating is stackable, can be configured in a variety of ways, is able to be used by one or many people, allows for storage, and/or even a designation of space.

From Dublin to Chicago Using Materials By Way of Hong Kong

In August 2016, the Sweet Water Foundation team traveled to Dublin, Ireland to participate in A Fair Land, a visual and working installation at the Ireland Museum of Modern Art(IMMA) led by Grizedale Arts (UK). A Fair Land sought to demonstrate a system for living using basic and simple resources used in a creative way.  The SWF provided hands-on carpentry support to IMMA and Grizedale Arts as they collectively examined how self-determination and dignity can be delivered through the inherent human function of creativity.

The inspiration for Fractal Seating was born out of the collective work and principles of A Fair Land with the intention to reclaim space using discarded, “waste” materials.  from the Confluence • 20+ Creative Ecologies of Hong Kong exhibit at the Chicago Design Museum, a long-time SWF partner.

The Fractal Seating Workshop on February 24 was part of Sweet Water Foundation’s year-long Radical [Re]Constructions installation and Emmanuel Pratt’s role as Interpreter-in-Residence at the Smart Museum of Art. The installation, and events such as the Fractal Seating Workshop, create a direct connection between SWF’s Perry Avenue Commons site in the Washington Park/Englewood community and the audience of the Smart.

The workshop also represents Sweet Water Foundation’s focus on re-creating educational spaces and is an extension of the Re[CREATE]Ed Spaces Program, which a youth program sparked by the and the DiscoverDesign.org Pocket Park Design Challenge to design a pocket park that provides much needed educational programming space for Sweet Water Foundation (SWF) and recreational and reflection space for the community.

BRINGING IT ALL TOGETHER

In early 2018, inspired by A Fair Land and equipped with remnants of the Confluence • 20+ exhibit at Chicago Design Museum, SWF staff set out to design a simple, replicable, multifunctional structure capable of claiming space. Thus, the fractal seating unit was born. SWF mentors, then, launched the construction process via internal workshops with youth apprentices, through which apprentices sketched the design, created 3-D models, and, ultimately, built the prototype unit. The process was documented extensively, resulting in the development of a Fractal Seating lesson plan. The team then shifted to the SWF Workshop where the team of mentors and apprentices constructed 30 finished and 10 unfurnished units to prepare for the inaugural workshop at the Smart Museum.

After a brief introduction, the lobby of the Smart Museum came to life with educators and students, alike, with individuals switching roles as the tasks required to construct the stools became increasingly challenging. With minimal prompting and very little instruction, the groups were given pre-cut wooden parts, a drill, and screws. They used a fully constructed fractal seating unit as a reference from which they drew their own conclusions and connections as to how it was constructed.

Participants were challenged to not only build the units but also [re]imagine spaces with the simple materials they were given. Terms like fractal, component, and unit were introduced and discussed as essential elements of the modularity of the design that allows it to occupy as many and as much space as needed. Educators brainstormed new and creative uses for fractal seating and its potential to transform students and the spaces they occupy in their classrooms, schools, and communities. Educators left inspired by the process and committed to activate new spaces and teach others.

The focused efforts of 6 Sweet Water Foundation staff and youth apprentices to cultivate and develop a framework for fractal seating over a 3-week period was exponentially amplified in a single 2-hour workshop that reached more than 40 educators (teachers, principals, and administrators), who, in turn, will reach hundreds of youth.

This Fractal Seating Workshop is the first of many workshops of the Radical [Re]Constructions Solutionary Workshop Series that will take place at the Thought Barn on the Perry Ave Commons beginning in Summer 2018.

What is a fractal?

fractal  frac·tal  /ˈfraktəl/
noun: “a curve or geometric figure, each part of which has the same statistical character as the whole. Fractals are useful in modeling structures (such as eroded coastlines or snowflakes) in which similar patterns recur at progressively smaller scales, and in describing partly random or chaotic phenomena such as crystal growth, fluid turbulence, and galaxy formation”

One stool can be used as storage, as a seat, or to hold a flower pot. One stool impacts an individual’s ability to store.

With multiple stools however, entire spaces can be redesigned. They can be stacked to make tables or vertical storage spaces. Our concept of space is challenged with the fractal stools, and we are encouraged to turn spaces into productive pieces of the community.

Re-blogged with permission from the Sweet Water Foundation 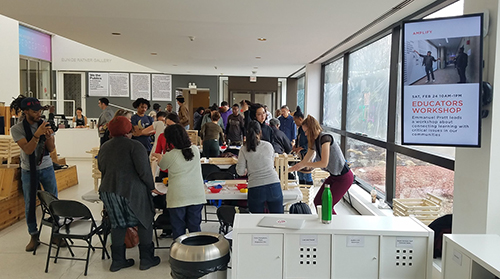 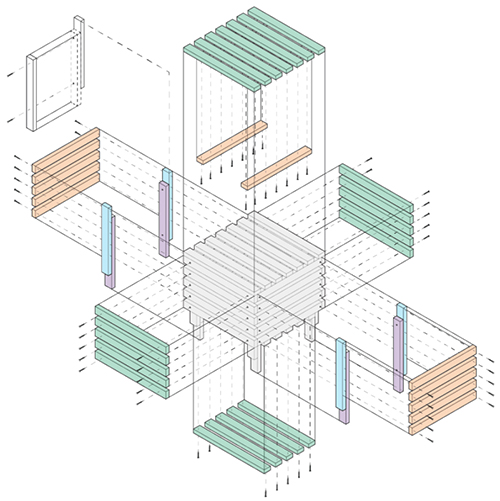 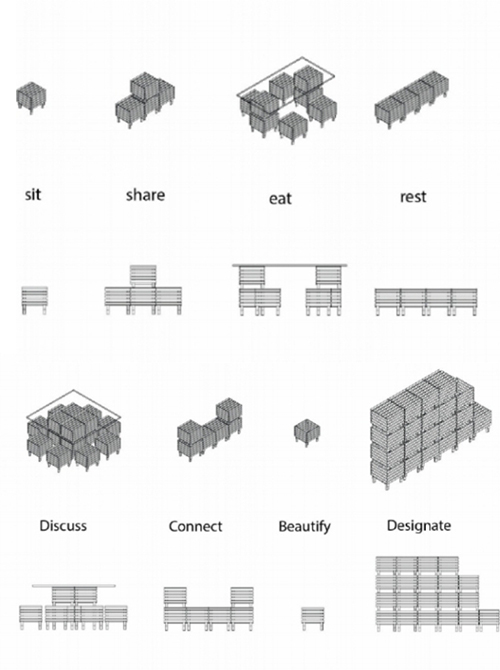